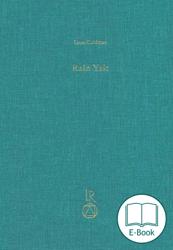 E-book 3,7 MB
This book contains a critical edition of the Avestan language composition known as the Rašn Yašt, or ‘Hymn to Justice’. The text is accompanied by an English translation, philological commentary and glossary. In addition, the main themes of the Rašn Yašt are taken up for detailed discussion, covering the Zoroastrian deity Rašnu, ancient Iranian cosmography, and the use of ordeal rituals in pre-Islamic Iran.

For the first time, this work treats in a comprehensive manner the Rašn Yašt, or ‘Hymn to Justice’. The Rašn Yašt stands in praise of the Zoroastrian deity Rašnu ‘Justice’ and belongs to the group of religious texts known as the Avesta – a collection of compositions in the ancient Iranian language of Avestan. Although the Rašn Yašt, like all of the Avesta, is generally assumed to have been committed to writing either during or shortly after the Sasanian era (224-651 CE.), its verses were probably composed during the early first millennium BCE.
The present monograph contains an English translation of the Rašn Yašt supported by a critical edition of the Avestan text. The latter is based on the testimony of thirteen manuscripts, of which nine were newly collated. Variant readings from the manuscripts are recorded in a detailed and easy to read apparatus. Matters of a philological or text critical nature are taken up for discussion in an accompanying commentary and all forms appearing in the Rašn Yašt are parsed in the text’s glossary.
In addition, this book includes three introductory chapters that aim to elucidate the key themes of the Rašn Yašt. The first chapter concerns the titular divinity Rašnu and explores his role as a judicial figure, both in this world and the hereafter. The second chapter explicates the cosmographic scheme which is uniquely preserved in the Hymn to Justice and argues this map of the universe encodes numerical and spatial patterns. The third chapter draws upon Avestan and Middle Persian sources to give an in depth account of the use of ordeal rituals in ancient Iran – a practice with which Rašnu is intimately associated and which is repeatedly mentioned in the Rašn Yašt.
This work is intended for specialist and more general audiences alike, and is principally aimed at those with interests in Indo-Iranian philology, Zoroastrianism, ancient Iran and comparative religion.
„Goldman’s Rasn Yast is without doubt the new standard edition to consult for anyone working with material from Y12. Thanks to the extended introductory remarks in section 1, the book may also function as a point of entry to the Yast genre in general. Indeed the fact that most of the philological arguments are spelled out at lenght makes the book accessible for non-specialists as well.“

Von: Benedikt Peschl (Ludwig-Maximilians-Universität München)
In: Indo-Iranian Journal 60 (2017) 285-301.
Dr. Leon Goldman was born in 1981 in London, England. Having obtained a B.A. (Hons.) degree from the University of Queensland (Australia) in 2004, with a particular focus on Indian religions and Sanskrit, he returned to London to pursue an M.A. in Iranian and Zoroastrian studies at SOAS. In 2012, he was awarded a Ph.D. from SOAS for his doctoral thesis entitled: Rašn Yašt. The Avestan Hymn to ‘Justice’. Text, Translation and Commentary. From 2012 to 2015, he held the post of British Academy Postdoctoral Fellow at SOAS with a project devoted to the Sanskrit version of the Zoroastrian Yasna liturgy.