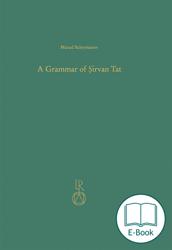 E-book 2,8 MB
A Grammar of Şirvan Tat is a grammatical description of a dialect of Tat, a non-written Iranian language spoken in the Caucasus. The project draws on a corpus of Tat spontaneous speech, as well as tales, legends, anecdotes and other folkloric texts collected during interviews with native speakers in Azerbaijan and Georgia. It contains a typology-based analysis of different aspects of Tat grammar, as well as comparisons of its most characteristic features with those of closely related dialects and languages and of other languages spoken in the same region. In addition to highlighting phenomena that are under-described for Iranian languages, the work seeks to contribute to Caucasian studies as a description of a linguistic variety spoken in an area of intense contact between several language families.