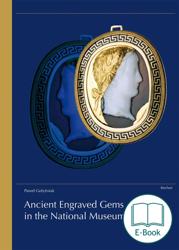 Ancient Engraved Gems in the National Museum in Kracow

E-book 95,8 MB
The collection of ancient engraved gems in the National Museum in Krakow is considerable in size and top in quality. It consists mostly of the specimens assembled by the extraordinary collector and art dealer Constantine Schmidt-Ciążyński (1818-1889). Almost 780 cameos, intaglios, scarabs and finger rings are presented in this volume provenance from the
Babylonian, Mycenaean, Egyptian, Greek, Etruscan and Roman cultural circles, and there are also smaller, but highly interesting groups of magical gems and amulets, Early Christian as well as Sassanian gems and seals. The collection is scarcely known and almost all objects are brought to the attention of a broader audience for the first time. Many of these
gems are the finest products in their specific classes, especially if it goes to the Augustan glyptics. There are several masterpieces like State Cameos presenting portraits of the members of Imperial families (either Julio-Claudian and later ones). There are also gems with unusual, ambiguous or very rare iconography. This book is not only a comprehensive annotated catalogue, where each specimen is broadly discussed and referenced to the newest literature, but also a study of the collection’s history as well as objects’ provenances. As a result, the volume should be of interest of archaeologists, art historians and all enthusiasts of classical culture and history of collecting.
This book is a catalogue raisonée of a rich collection of ancient engraved gems housed in the National museum in Krakow. It offers a thorough insight into ancient glyptic art through the considerable range of almost 780 so far unpublished objects – cameos, intaglios, scarabs and finger rings of various styles, workmanship and cultural circles: Egyptian, Near Eastern, Minoan, Greek, Etruscan, Italic, Roman, Sassanian and early Christian, dated from the second millennium BC to the seventh century AD.

Many pieces in this cabinet are notable not only for their top quality in terms of craftsmanship and design, but also for the materials used and engravings involving complex iconography illustrating religious beliefs, political allegiances, needs and desires that ancient people wished to be fulfill, fears, dangers and terrors from which they sought protection and even their daily occupations. The collection provides with a fascinating gallery of portrait studies presenting Hellenistic rulers and their queens, Roman emperors and members of their families as well as some private individuals. Some specimens are exceptional and unparalleled like the onyx cameo portraying Drusus Maior, likely executed by the hand of Eutyches, son of famous Dioscurides (cover) or a tiny but remarkably cut emerald cameo with a laureate portrait bust of Livia Drusilla as goddess Venus. Some objects have been preserved in their original settings (gold, silver, bronze, iron rings), which contributes to the study of ancient gems’ chronology and indicate their users, while others have been later re-set into eighteenth- and nineteenth-century collectors’ rings and sometimes more elaborated mounts. There are also pieces discoloured due to contact with considerable heat, which may suggest them to have been burnt with other personal objects on the funeral pyres and later deposited in burials. Noteworthy is the number of Greek and Latin inscriptions appearing on intaglios and cameos forming this cabinet. They span from owners’ names to the subtle messages communicated between lovers and invocations to the God.

Each gem is thoroughly analysed, described and exhaustively commented as to the device it bears, chronology and possible workshop attribution. A vast number of parallel objects is referenced too. This combined with provenance study presented in the first part of the book enabled to establish where a number of intaglios and cameos were manufactured, including almost 140 objects most likely to origin from the most important Roman workshop located in Aquileia. It ought to be singled out that many gems in this volume once constituted a part of distinguished collections formed by such personalities as Tobias von Biehler, Alessandro Gregorio Capponi, Auguste le Carpentier, Alessandro Castellani, Comte de Caylus, Count Nikolai Nikitich Demidoff, Baron Albert de Hirsch, Jean François Leturcq, Sibylle Mertens-Schaaffhausen, Dr. George Frederick Nott, Benedetto Pistrucci, James-Alexandre de Pourtalès (Comte de Pourtalès-Gorgier), Paul von Praun, Andrey Kirillovich Razumovsky, Jacques Meffre Rouzan, Philipp von Stosch, Antonio Maria Zanetti and many more. They seemed lost for more than 130 years, but now have been brought back and are accessible to everyone. Consequently, the volume presents three intriguing stories of collectors whose donations contributed to the Krakow assemblage. They not only provide the reader with a sort of background for the objects discussed further, but also illustrate nineteenth- and early twentieth-century collecting practices and the art market for engraved gemstones, contributing to our knowledge of the history of scholarship and collecting. In summary, this book is intended to be useful not only for scholars interested in gems, but also those who study the history of the art market and collecting as well as all the enthusiasts of Classical art and archaeology.
Pawel Golyzniak