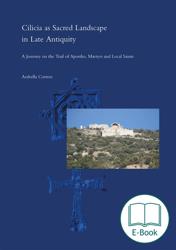 A Journey on the Trail of Apostles, Martyrs and Local Saints

E-Book 216.0 MB
Cilicia as Sacred Landscape in Late Antiquity is a journey of discovery of the rich religious landscape of Cilicia in Asia Minor in Late Antiquity, with its contrasting and fascinating natural landscapes. Famous and prosperous cities of Cilicia Pedias such as Tarsos and Anazarbos welcomed pilgrims from distant western lands on their way to Jerusalem, attracted by famous stories about their saints and especially the Apostle Paul. The rugged mountains that characterized the western part of Cilicia (so-called Isauria) concealed places of worship associated mainly with the memory of Saint Thekla, whose place of pilgrimage was located a few kilometres south of the city of Seleukeia on the Kalykadnos, and of local martyrs, like Saint Konon, who were sometimes venerated internationally.
The present book examines all the archaeological and architectural evidence (building remains, inscriptions, decorations, mosaics, coins) that testify to the veneration of saints in Cilicia and Isauria, and integrates them with hagiographic evidence that tells us, above all, about the places where the saints stayed, performed their miracles, and died. Particular attention is paid both to the physical characteristics of the region, which strongly influenced the construction of religious structures in certain places and shaped their form (often integrated into the landscape), and to the historicity of the sites. Indeed, numerous churches were built on earlier pagan structures (temples, thermae, agora, rock or water sanctuaries). The central questions of the book are concerned with how martyria and pilgrimage sites affected the spatial planning (roads, accessibility, buildings) of the region, how the worship of a saint was organized in its pilgrimage sites, how existing structures contributed to the sacrality of a site and offered a continuity with the past, and, finally, how the particular relationship between sacrality and nature was enacted architecturally.
This volume is an archaeological work that focuses on the late antique process of creating sacred space in a marginal but extensively travelled region of Asia Minor. Combining the architectural and archaeological analysis of Christian church buildings and martyria with literary sources attesting the cult of a saint, it aims to reconstruct the sacred landscape of an underestimated region through the lens of a pilgrim and contributes towards the understanding of the pilgrim networks on the way to Jerusalem.