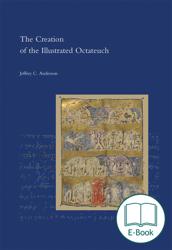 The Creation of the Illustrated Octateuch

E-book 22.2 MB
The illustrated Octateuch is among the most complex creations of the Middle Byzantine period. The Septuagint text of the first eight books of the Old Testament contains hundreds of miniatures in addition to a dense commentary, notes with variant readings, prologues and epilogues. The author shows that the text and images all derive from a single manuscript created in Constantinople around 1060. He accomplishes this by concentrating on one of the manuscripts in comparison with an example that is not illustrated but belongs to the same text family and shares a group of distinctive lacunae. This related Octateuch reveals how the designer of the model of the illustrated manuscripts worked to integrate the various form of content.
The illustrated Octateuch is the most complex work of its kind produced in Byzantium. It consists of the first eight books of the Old Testament in the Septuagint translation, which is surrounded by thousands of comments from the writings of the Church Fathers and notes with variant readings; the text itself is interrupted by hundreds of illustrations. There are five Octateuchs and they date from the twelfth and thirteenth centuries; one example, destroyed in 1922 and known only from low quality reproductions, is published here from a newly discovered set of photographs. Since the early twentieth century the five manuscripts have been taken to be closely related, deriving from two different models that ultimately depend on a single, Early Christian source. In a preliminary chapter the author introduces the constituent parts of the manuscripts and the studies used to evaluate them. A group of miniatures that is considered to be the foundation for the theory of two sources receives a careful review. Then, working from the interruptions to and restored lacunae in the text, as well as the notes to it, the author shows that the manuscripts all descend from a single source; with the help of two Octateuchs related by textual content (but without illustration) it is possible to describe the lost source with considerable accuracy. Analysis of the illustrations shows that the source was made around 1060. The conclusion lays to rest issues that have been actively debated since the time of Josef Strzygowski. The principal audience for this study consists of Byzantinists concerned with manuscript studies. It should also be of interest to medievalists generally, art historians and those concerned with the transmission and use of the Bible in the Middle Ages. The author expects the book to be read with profit by graduate students, who can benefit from the approach.

Jeffrey C. Anderson received his Ph.D. from Princeton University in 1976 and taught at the George Washington University, Washington, D.C., from 1975 until his retirement, in 2011. He has published numerous articles on Early Christian and Byzantine art. His latest book, written with Stefano Parenti, is A Byzantine Monastic Office, 1105 A.D., published in 2016.