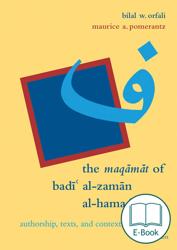 E-book 6.2 MB
Through investigations of manuscripts, this book explores important aspects of the life of Badîʿ al-Zamân al-Hamadhânî’s Maqâmât. The broad concerns of the book are divided into three sections: authorship, texts, and contexts. Each chapter in this volume investigates hitherto unstudied textual materials related to al-Hamadhânî’s Maqâmât that adds to our understanding of the text, its history, and the literary culture that created it.

Through investigations of the manuscripts, this book explores important aspects of the life of Badīʿ al-Zamān al-Hamadhānī’s maqāmāt. Relying solely on the flawed nineteenth century editions not only compromises the results of modern scholars’ investigations of al-Hamadhānī’s text, but also prevents us from appreciating the literary culture that created this work. The broad concerns of the book are divided into three sections: authorship, texts, and contexts, although there are some overlaps across these fields. One constant is that each chapter in this volume investigates hitherto unstudied textual materials related to al-Hamadhānī’s Maqāmāt.
Part 1, Authorship, of the book begins with two studies related to al-Hamadhānī’s authorship. It reviews several theories about al-Hamadhānī’s reliance on earlier forms in the creation of the maqāma, and provide an edited fragment of a lost work by the well-known grammarian Ibn Fāris (d. 395/1005). It also describes the way that al-Hamadhānī’s individual maqāmas came to be included in manuscript collections in the years following his death.

Part 2, Texts, presents the editions of four maqāmas attributed to al-Hamadhānī in the manuscript tradition, that were not included in Muḥammad ʿAbduh’s printing: the Ṭibbiyya, Sharīfiyya, Hamadhāniyya, Khātamiyya, along with a discussion and analysis of their contents in relation to the extant corpus of al-Hamadhānī’s maqāmāt.

Part 3, Contexts, provides studies and translations of key maqāmas of al-Hamadhānī. “Adab and Metamorphosis: The Mawṣiliyya” is an edition, translation, and modern commentary on this maqāma in which Abū l-Fatḥ famously attempts to raise a dead man from the grave. This commentary identifies sources from which al-Hamadhānī may have drawn, affording modern readers further context with which to explore this tale. “What the Qadi Should not Hear: The Shāmiyya” provides the first scholarly edition of this maqāma, which ʿAbduh excised from the 1889 Beirut printing. The study explores how this maqāma draws upon ideas about the limits of proper and improper speech. The last chapter offers a study and edition of a hitherto unknown commentary on the Maqāmāt of al-Hamadhānī that the authors argue may be an example of auto-commentary. The proposed interpretation has profound implications for how the Maqāmāt of al-Hamadhānī were understood by the first generations of readers, including the writers of maqāmas who followed him.
Bilal Orfali, Ph.D. (2009), Yale University, is Sheikh Zayed Chair for Arabic and Islamic Studies at the American University of Beirut. He specializes in Arabic literature, Sufism, and Qurʾānic Studies. Orfali is the author and editor of more than twenty books in the field of Arabic Studies. His recent publications include: Approaches to the Study of Pre-modern Arabic Anthologies (Brill, 2021), Light Upon Light (Brill, 2019), Insatiable Appetite: Food as Cultural Signifier in the Middle East and Beyond (Brill, 2019), The Anthologist’s Art (Brill, 2016), The Book of Noble Character (Brill, 2015), The Comfort of the Mystics (Brill, 2013), Sufism, Black and White (Brill, 2012), and In the Shadow of Arabic (Brill, 2011).

Maurice Pomerantz, PhD. (2010), University of Chicago, is a scholar of Arabic literature of the pre-modern period at New York University Abu Dhabi. His interests include Arabic belles-lettres poetry and prose.  His is the author of Licit Magic: The Life and Letters of al-Ṣāḥib b. ʿAbbād (d. 385/995) (Brill, 2018) and the co-editor of The Heritage of Arabo-Islamic Learning (Brill, 2016), and In the Presence of Power: Court and Performance in the Pre-modern Middle East (New York University Press, 2017).