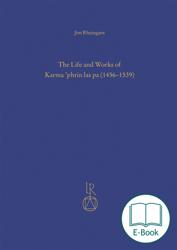 E-book 5.8 MB
Among the so-called learned and accomplished masters of Tibet’s “long 15th century”, the First Karma ’phrin las pa stands out as influential commentator on Saraha’s Dohā, great poet, and key figure in the rise of Central Tibetan block printing workshops. This book aims to present a historical investigation of his life and works in the context of his time, clarifying his spiritual roles and titles. Sources are Tibetan hagiographies about Karma ’phrin las pa and all his available writings (including their colophons), along with genealogies, letters, instructions, religious chronicles, and life narratives of some of his contemporaries.