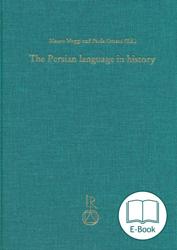 E-book 8.1 MB
Fourteen papers on a diversity of themes relating to the grammar and the vocabulary of Persian, Middle Persian texts, non-standard and early varieties of Persian, and dialects of Iran. Editions of so far unpublished texts are also included. Contributions by Gerardo Barbera, Claudia A. Ciancaglini, Desmond Durkin-Meisterernst, Ela Filippone, Daniele Guizzo, Mohammad Hasandust, Judith Josephson, Gilbert Lazard, David N. MacKenzie (†), Mauro Maggi, Paola Orsatti, Elio Provasi, Hassan Rezai Baghbidi, and Riccardo Zipoli. For students of Persian, Iranian philology, and comparative and general linguistics.
The volume - of interest to students of Persian, Iranian philology, and comparative and general linguistics - contains fourteen papers that cover a diversity of themes relating to the history of the Persian language, including Middle Persian. Editions of so far unpublished texts and new language materials are also included.
In Part I (Historical and descriptive grammar of Persian), Claudia A. Ciancaglini traces the formation of the periphrastic verbs of the “noun + kardan” type back to Indo-Iranian and suggests that such verbs in neighbouring non-Iranian languages are due to the influence of Persian and other Iranian languages; Judith Josephson surveys the devices developed in Middle Persian to convey various degrees of definiteness and deixis; Paola Orsatti recognises a deictic suffix -i in New Persian and documents its history in early and classical texts; and Gilbert Lazard provides a theoretical reference frame for the problem whether New Persian has one or more postnominal suffixes -i.
In Part II (Middle Persian), Desmond Durkin-Meisterernst surveys the history of research on the Manichaean Middle Persian texts from Turfan; and Hassan Rezai Baghbidi offers a new edition and translation of the Middle Persian and Chinese inscription from Xi’an.
In Part III (Non-standard New Persian), Elio Provasi provides an edition with translation, commentary, and glossary of seven unpublished New Persian fragments in Manichaean script from Turfan; Ela Filippone studies the language and translation techniques of the early dialectal translation of the so-called “Qor’ān-e Qods”; David N. MacKenzie’s unpublished index to the “Early Jewish-Persian argument” published by him in 1968 appears here posthumously; and Mauro Maggi and Paola Orsatti publish and translate two Persian hymns in Syriac script from manuscripts in the Mingana Collection.
In Part IV (Literary New Persian), Mohammad Hasandust identifies and provides with an etymology eight words occurring in literary sources but so far ignored by Persian lexicography, and Riccardo Zipoli publishes a sample of a dictionary of obscene terms that, once completed, will assist in the study of texts tabooed on account of their vocabulary.
In Part V (Dialectology), Gerardo Barbera offers an thorough presentation of the Minabi lexicon relating to the palm in comparison with other dialects of the area and with Persian, while Daniele Guizzo deals with Tāleši terms for celestial bodies and weather phenomena and studies their position relative to neighbouring languages.

Mauro Maggi, born in Como in 1957, is associate professor of Iranian philology at the University of Rome La Sapienza. His research focuses chiefly on the Khotanese language and literature but also extends to Early New Persian. Besides a number of articles in scholarly journals and multi-author works, he has published The Khotanese Karmavibhaṅga (Rome 1995) and Pelliot chinois 2928: a Khotanese love story (Rome 1997).

Paola Orsatti, born in Rome in 1956, is associate professor of Persian language and literature at the University of Rome La Sapienza. Her research focuses chiefly on the history of the Persian language, as well as on Persian literature and the history of Oriental studies in Europe. Besides a number of articles in scholarly journals, she has published Il fondo Borgia della Biblioteca Vaticana e gli studi orientali a Roma tra Sette e Ottocento (Rome 1996) and Appunti per una storia della lingua neopersiana (Rome 2007).