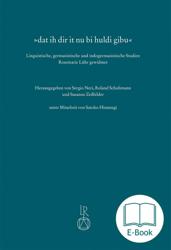 E-book 12.3 MB
Dr Sergio Neri (born 1970) studied German, English and Linguistics/Philology at the University of Perugia (Italy). After further studies at German and Austrian universities, he earned his PhD in Indo-European Historical Linguistics and Comparative Philology summa cum laude from Jena. His thesis “Wetter: Etymologie und Lautgesetz” (2011) was directed by Prof. Rosemarie Lühr.
Dr Neri has been teaching at the University of Jena since October 2003. In addition, he was fellow researcher in 2002 - 2004 at the two-year DFG-funded project “Etymologisches Wörterbuch der deutschen Dialekte”, in 2006 at the project “Normen- und Wertbegriffe in der Verständigung zwischen Ost- und Westeuropa” funded by Volkswagenstiftung; and, in 2012 - 2013, at the DFG-funded project “Thüringisches Etymologisches Wörterbuch”. In October 2007, Dr Neri took up his position as ‘Wissenschaftlicher Mitarbeiter’ in the Department of Indo-European Historical Linguistics and Comparative Philology at Friedrich-Schiller-Universität Jena (Lehrstuhl für Indogermanistik). His research expertise is in Indo-European nominal inflection and derivation, as well as Germanic, Latin and Greek Philology and Etymology.

Dr. Roland Schuhmann (born 06.10.1972 in Leuven [Belgium]) studied Classics in Leiden, Indo‑European and Classics in Gießen and Indo‑European, Latin and Medieval Latin in Jena. Since 2000 he works as research fellow on the Etymologisches Wörterbuch des Althochdeutschen. Between 2005 and 2012 he was research fellow at the Lehrstuhl für Indogermanistik at the Friedrich‑Schiller‑Universität Jena and between 2013 and 2014 he worked as research fellow on the project „Reading and interpreting runic inscriptions: the theory and method of runology“ at the Centre for Advanced Study in Oslo. Between 2015 and 2016 he is research fellow at the Department of German Studies and Linguistics at the Humboldt‑University at Berlin. He has published articles on Germanic and Latin linguistics.