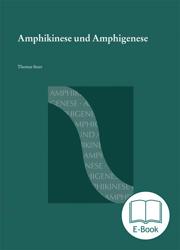 E-book 2.6 MB
The present study from the field of comparative Indo-European linguistics deals with the so-called amphikinetic accent and ablaut class of athematic nouns in Proto-Indo-European. Its focus lies on secondary amphikinetic formations—that is, on such amphikinetic stems that are derived from other nominal stems by means of non-suffixing (so-called “internal”) derivation. On the basis of selected amphikinetic compounded and simple nouns it is investigated which factors in each case lead to the development of the amphikinetic ablaut pattern. As is demonstrated, the accent or, more precisely, a shift of accent plays a significant role in the development of some secondary amphikinetic stems. This result also strengthens the widely held view that ablaut in Proto-Indo-European was—at least partly—a phenomenon caused by the (shift of) accent.

The present investigation from the field of comparative Indo-European linguistics contributes to the research of nominal morphology of the Indo-European protolanguage. Problems involved in this work are central topics of Indo-European linguistics such as (shift of) accent, ablaut, the question of ablaut caused by (shift of) accent, hierarchy of inflectional classes, internal derivation, collectivity, composition, etc. In the center of the study is the so-called amphikinetic accent and ablaut class of athematic nouns (substantives and adjectives) in ancient Indo-European languages and in the Indo-European protolanguage (Proto-Indo-European). Simply put, amphikinetic stems are trisyllabic nouns consisting of root, suffix, and case ending that are accentuated on the first syllable in nominative and accusative, but on the third syllable in the other cases, a phenomenon that deviates from the accent pattern of the remaining inflectional types and the origin of which is hitherto disputed. Well-known examples for the accent and ablaut pattern of such amphikinetic nouns are, for instance, the Proto-Indo-European word for ‘(goddess of) dawn’ (*h2éu̯s‑ōs, Genitiv *h2us‑s‑és) and for ‘earth’ (*dhéǵh‑ōm, Genitiv *dhǵh‑m‑és). The focus of the book lies particularly on secondary amphikinetic formations—that is, on amphikinetics being derived from other nominal stems by means of non-suffixing derivation (so-called “internal derivation”). In this context, it is investigated which factors in each case lead to the development of the typical amphikinetic ablaut pattern. Included in this investigation are amphikinetic compounds as well as simple nouns. Among amphikinetic compounds and non-collective simple nouns, the accent emerges as a constituting feature of amphikinesis because a part of amphikinetic compounds and simple nouns resulted from a shift of accent accompanying the process of composition and internal derivation, respectively. As a result, the present investigation confirms the widely held view that ablaut (that is, vowel gradation) in Proto-Indo-European was—at least partly—a phenomenon caused by the (shift of) accent. Moreover, the book contributes to the exploration of internal derivation and sheds new light on the hierarchy and interplay of the accent and ablaut classes of athematic nouns in Proto-Indo-European. This is accomplished by showing that the amphikinetic class was not always separated from the other three inflectional classes. Finally, a chapter of the book is dedicated to the study of amphikinetic collective formations. Also in this context new insights are gained into the derivational behavior of the amphikinetic class and its relationship to the other inflectional classes.