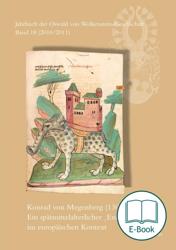 E-book 7.1 MB
This proceedings places Konrad von Megenberg (1309-1374) squarely at the focal point of European cataloging. It combines contributions from Megenberg followers from different disciplines and creates a wide spectrum of thought on the modern effectiveness of this first German "non-fiction writer." It provides innovative food for thought within the scientific debate on the interplay between Latin traditions of knowledge and the beginnings of a German culture of knowledge.
This volume arose out of the interdisciplinary and international conference “Konrad von Megenberg (1309 to 1374): A Late Medieval Encyclopaedist in his European Context”, which took place in Regensburg from 27th to 29th August 2009, organized by the chair of Early German Literature at the University of Regensburg and the Oswald von Wolkenstein Society, in co-operation with the City of Regensburg and the Regensburg Diocese. It contains contributions by established Megenberg researchers, which view the scholar and Canon of Regensburg Cathedral, Konrad von Megenberg, and his not inconsiderable body of works from the specific perspective of European encyclopaedic compilation, elucidating the multifaceted spectrum of innovative methods of this, the first non-fiction author in the German language. The essays offer food for thought in the scholarly discourse on the interrelatedness of the Latin tradition of learning and the beginnings of a learned culture in the German language. The contributors hail from a wide range of subject specialisms, far beyond German Studies: alongside literary scholarship the book contains insights from linguistics, art history, educational theory, history of medicine and pharmacy, history of law, medieval history and mathematics. Their diversity of content and methodology reflect the extraordinary breadth of Konrad’s oeuvre. Discussions cover Konrad’s relationship to Latin and vernacular encyclopaedia-writing, the logic of knowledge, various methods of organizing knowledge, and the importance of medium in the transmission of knowledge (then as now). Other contributions focus on natural history, offering not only investigations of individual animals but also analyses of social phenomena and Konrad’s narrative technique. In the field of cosmology the contributions are orientated primarily around the difficult question of the relationship between expert and lay knowledge, and the related problems of reception. The volume closes with contributions to legal history which are concerned with areas of political and social conflict and with Regensburg’s historiographical tradition, which Konrad influenced considerably. The volume is thus designed to reflect the works of Konrad von Megenberg: as multifarious as the thematic range of interests of this medieval scholar are, so scholarship about him transcends disciplinary boundaries, even that most fundamental boundary, between the humanities and natural science.