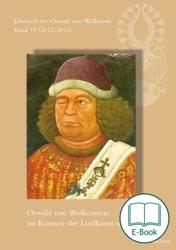 E-book 3.2 MB
The South Tyrolean knight Oswald von Wolkenstein (ca. 1377-1445) is the most notable German lyricist of the late Middle Ages. The present volume contains 25 articles in total, which have been compiled from the presentations at a great conference held by the Oswald von Wolkenstein society in Brixen in 2012. The authors are a mixture of renouned and younger Germanists and musicologists. The papers reveal diverse perspectives from which researchers are investigating the songs of Oswald today. The volume represents the current state of Oswald von Wolkenstein research.

The South Tyrolean knight Oswald von Wolkenstein (ca. 1377-1445) is the most notable German lyricist of the late Middle Ages. His challenging oeuvre, which is preserved in two manuscripts that were written under his eyes and are kept today in Innsbruck and Vienna, comprises two rhymed couplets and 130 monophonic and polyphonic songs of different kinds, recorded with their tunes, ranging from spiritual songs and various types of love songs to songs in which the author reports his own experiences.This astonishing corpus remained almost unknown in the late Middle Ages, it was only rediscovered in the 19th century, but even then it received little regard. Only since the early 1960s has it increasingly caught the interest of researchers and the literary public, well beyond the German-speaking world. Since then, researchers in the fields of German studies and musicology have been studying Oswald’s lyrics and tunes intensively and under various aspects, for exampl, since 1973, in several conferences dedicated to the poet. The present volume contains 25 articles in total, which have been compiled from the presentations at a great conference held by the Oswald von Wolkenstein society in Brixen in 2012. It represents the current state of Oswald von Wolkenstein research. The papers reveal diverse perspectives from which researchers are investigating the songs of Oswald today. Among other things, the spritiual songs and the love songs are paid tribute to, also the relations between metrical-musical forms, the sytactic structures, the questions of humour and laughter, of the adoption of tunes, and of Oswald’s relation to the literary tradition; moreover, the possibility of translating Oswald’s lyrics into Italian is considered. The authors are the Germanists and musicologists Ricarda Bauschke-Hartung, Michael Braun, Michael Dallapiazza, Frank Fürbeth, Kathrin Gollwitzer-Oh, Franz-Josef Holznagel/ Hartmut Möller, Susanne Homeyer/ Inta Knor, Gert Hübner, Beate Kellner, Johannes Kipf, Fritz Peter Knapp, Freimut Löser, Valerie Lukassen, Patrizia Mazzadi, Hans Moser, Ulrich Müller, Stefan Rosmer, Andrea Schindler, André Schnyder, Ursula Schulze, Reinhard Strohm, Regina Toepfer, Tomas Tomasek, Burghart Wachinger, René Wetzel/ Robert Schulz.

2. University self-administration, memberships, awards
since 1996 liaison lecturer of the German National Academic Foundation at the university of Bamberg
1999-2000 university gender equality officer (with Marianne Heimbach-Steins)
2000-2004 prorector for research and junior academic staff
2005-2012 assistant chairwoman of Hochschulgermanistik in Bayern e.V.
since 2000 executive board member of the Oswald von Wolkenstein society
since 2007 member of the Academic Advisory Board for the Monumenta Germaniae Historica at the Berlin-Brandenburgische Akademie der Wissenschaften
since 2012 member of the advisory body for the Bavarian law for the advancement of elites (Beirat BayEFG)
since 2012 chairwoman of Hochschulgermanistik in Bayern e.V.
2004-2006, 2008-2010, and since the summer semester of 2009 executive director of the ZEMAS
since summer semester 2013 head of the Institute for German Studies at the universtiy of Bamberg

3. Research interests
- German literature of the 12th to 16th centuries
- transmission and edition of texts
- gender studies
- reception of the medieval thought and culture

4. Extensive work as evaluator
Including work for the fund for the support of academic research in Austria, the Alexander von Humboldt fund, the DAAD, committee member or reviewer in numerous hablitation and appointment procedures as well as evaluations of departments, institutes etc. in Germany and abroad.