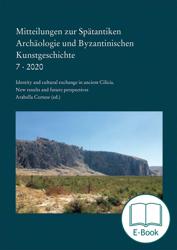 E-book 10.4 MB
The publication on Rough Cilicia "Identity and cultural Exchange in Ancient Cilicia: New Results and Future Perspectives" combines the results of a workshop held at the Ludwig-Maximilians-University of Munich in May 2018. It contains a series of individual studies that reveal the uniqueness of Cilicia as a cultural landscape shaped by geography and regional interaction.
To this end, the expertise of scientists who have carried out important research in Cilicia or Isauria over the last ten years will be brought together. By providing a diachronic overview of archaeological finds from the Hellenistic period to Late Antiquity, this volume promotes comparative analyses between the rough and the flat Cilicia. Results of archaeological regional studies, which too often remain isolated, are combined to examine the factors that contributed to acculturation processes in Cilicia and that shaped the local identity of the region.
Identity and Cultural Exchange in Ancient Cilicia—New Results and Future Perspectives is the results of a conference held at the University of Munich in 2018. It assesses the state of knowledge regarding Cilicia between the Roman period and Late Antiquity. The diverse array of studies in this volume contribute to the reappraisal of the region as a unique cultural locale.
What must we analyze in order to understand the identity of a multifaceted region, which contains manifold landscapes, multicultural communities, and displays influences from several cultures, as Cilicia did in Late Antiquity? In answer to this main question, an international team of scholars from various research areas, linked by sustained work in Cilicia, present the latest results of their excavations or research.
The volume contains eight illustrated articles that deal with important topics in research on Cilicia, which are arranged chronologically from the Hellenistic period to Late Antiquity.
The first two articles analyze the emergence of the phenomenon of urbanization in the whole region and the birth of coin production and circulation in the fervent Cilicia Tracheia. The following two chapters consider the numerous epigraphic sources recently found in Cilicia, both in buildings and in funerary contexts, in order to show how the migration processes and cultural interchanges made the region a crossroads for peoples and cultures.
How did the advent of Christianity contribute to strengthening the role of Cilicia as a vital cultural region and a place visited by international visitors?
The last four contributions analyze the importance of the region in Late Antiquity through its sacred buildings. The archaeological evidence brought to light in excavation campaigns conducted continuously since 2011 in the city of Olba and its monastery highlights the continuity of use of the city in the Christian period and its relationship with the nearby cities.
How did the city of Korykos, a renowned city harbor in Late Antiquity, become a place of veneration for one or more local saints? This question is addressed by the penultimate article, which re-evaluates the importance of the city in Late Antiquity through careful analysis of some inscriptions found in the necropolis of Korykos and of an outstanding basilica, the architectural layout of which suggests a particular function.
The final contribution applies the sociological concept of gathering to the renowned pilgrimage site of Saint Thekla at Meryemlik in order to show how architecture and landscape contribute to the increase of pilgrimage experience of a Late Antique site.
This volume represents a significant contribution to the history and archaeology of the region, offering an updated overview of recent studies on Cilicia (many of which were published only in Turkish) and a survey of the Cilician past that can be considered the basis for future studies.