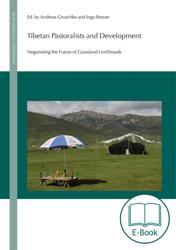 Negotiating the Future of Grassland Livelihoods

E-book 11.9 MB
The unique pastoralist economy, society, and culture on the Tibetan plateau has experienced profound changes during the 20th century: An ever closer integration into the Chinese state, a wide array of policies directed at ‘development’, modernization, and urbanization, and dramatic economic transformation. In its fifteen field-work based chapters, written by Tibetan, Han Chinese and Western scholars from the social and environmental sciences, this volume presents a selection of current perspectives on these recent transformations and explores their specific impact on local pastoral livelihoods.

The Tibetan plateau constitutes the world’s vastest high-altitude rangeland. It has featured a unique pastoralist culture where, based on yak and sheep production, on complex exchange systems with agricultural areas and the lowlands, and in the context of ever-changing political conditions, pastoralists developed livelihood systems that helped them adapt not only to the harsh environmental conditions, but also to the ever-changing political and economic trends. The 20th century, most prominently the plateau’s ever closer integration into the Chinese state, has brought profound changes to pastoral Tibetans. It has opened the plateau to the influence of a wide array of policies directed at ‘developing’, modernizing, and recently urbanizing the Tibetan pastoral areas. It has also connected even the remotest community to the booming Chinese markets and - indirectly - the world market. Pastoral communities, thus, are being opened up to new economic opportunities, exposed to new risks and integrated into increasingly complex commodity chains. Local consequences of climate change, the demographic transition, new lifestyles and consumption patterns, and new forms of wealth/poverty and social polarization further complicate the picture. The present volume discusses the question of possible futures of Tibetan pastoralism. Taking a perspective informed by the ‘Sustainable Livelihood’ approach, it presents a selection of current perspectives on these recent transformations and on their specific impact on local pastoral livelihoods on the ground. Its fifteen chapters, written by Tibetan, Han Chinese and Western scholars from the social and environmental sciences, offer field-work based local case studies that illustrate the complex roles of the (Chinese) state, of (new) markets, and of rangeland resources in the making of both the present and the future of the plateau’s pastoral livelihoods.

„(...) the volume is admirably thorough in its coverage of issues, provides very informative data and delivers a coherent set of arguments about the need to take Tibetan herders’ perspectives, experiences and knowledge seriously, and about Tibetan herders’
agency in shaping future drokpa trajectories. The volume’s inclusion of many Tibetan authors is also a definitive strength. In sum, it will be of great interest to those new to the field of contemporary Tibetan pastoralism as well as a handy reference for seasoned researchers and practitioners.“

Von Emily T. Yeh
In: Nomadic Peoples 22 (2018), S. 378-381
Andreas Gruschke earned his PhD in Development Geography at Leipzig University, Germany, with a thesis on livelihood issues of Tibetan pastoralists, following a M.A. in Geography, Social Anthropology and Chinese Studies at Freiburg University, Germany. After many years of work experience in the tourism sector in Tibetan areas and China, he became a researcher at the research center ‘Difference and Integration’ based at Leipzig University, where he worked from 2004 to 2012. Since 2012, he has held a professorship at the Faculty of Social Development and Western China Development Studies at Sichuan University, China. His research interests focus on the multiple transformations of nomadic societies, rural livelihoods, and on the impact of tourism development in Western China.

Ingo Breuer earned his PhD in Human Geography at Freiburg University, Germany. He has held a professorship at the Faculty of Social Development and Western China Development Studies at Sichuan University in Chengdu, China, since 2014. From 2001 to 2012, he was a researcher and project leader at the ‘Difference and Integration’ research center based at Leipzig University, Germany, leading research projects in North Africa and the Middle East. His research has focused on the impact of globalization and market integration on local economies in developing countries, on rural livelihood systems, and specifically on the transformation of nomadic societies.