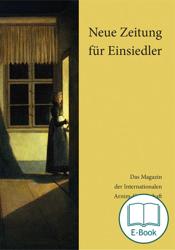 E-book 3.6 MB
Achim von Arnim’s Zeitung für Einsiedler, published in Heidelberg in 1808, represents one of the most original journals of the romantic era. The Neue Zeitung für Einsiedler, the publication of the International Arnim-Society, offers an important contribution to the current discourse on romanticism. It publishes supplements and miscellanea to the historical-critical editions of the romantic Era and provides essays, notes, reports of newfound sources, and book reviews that constitute an important resource for romantic scholarship.
Achim von Arnim’s Zeitung für Einsiedler (Tröst Einsamkeit), published from April to August 1808 as »an attempt of a new kind of Journal«, is still considered as »one of the most innovative journals of the literary romantic period that has become an integral part of the Heidelberg Romantic era« (Renate Moering). As editor of the journal, Arnim invited a number of varied contributions that linked historical with contemporary issues. In his spirit, we chose Arnim’s »Search, and you will find« – an entry into Grimm’s Stammbuch – as motto since the current issue provides a rich source of valuable resources that are in part addenda to current historical-critical editions as well as discoveries of unknown texts – all in all – an important contribution to Romantic scholarship. Although the essays are grouped into different categories, they nevertheless suggest dialogical interconnections. By setting literature and music, natural history and philosophy, autobiography and fiction side by side, we hope to inspire our readers to think about new ways of investigation in the field of Romantic scholarship.
Roswitha Burwick is professor emerita of German Studies and Distinguished Chair emerita of Modern Languages at Scripps College, CA. Her areas of research are German romanticism, especially Achim von Arnim, whose collected essays and writings in natural science she is editing in the Weimarer Arnim-Edition (WAA vo. 2 and 3). Her publications include essays on Achim von Arnim, Bettina von Arnim, Caroline von Günderrode and fairy tales. She is the Vice President of the International Arnim-Society and co-editor of Pacific Coast Philology, the journal of the Pacific Ancient and Modern Language Association.