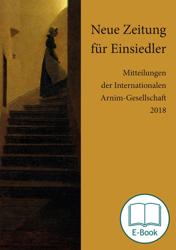 E-book 4.0 MB
Achim von Arnim’s Zeitung für Einsiedler (Tröst Einsamkeit) was published from April to August 1808 as »an attempt of a new kind of Journal« and is still considered today as »one of the most innovative journals of the literary romantic period that has become an integral part of the Heidelberg Romantic era« (Renate Moering). The Neue Zeitung für Einsiedler (Journal of the International Arnim-Society) was published for the first time in 2001 and is now produced and distributed by Reichert Verlag, Wiesbaden. To stay with Arnim’s intentions, it is both a »whimsical medley« of essays, reports and reviews but also of thoughtful analyses of literary works and their reception. Renate Moering’s comprehensive and detailed commentary in her historic-critical edition of the Zeitung für Einsiedler (Vol. 6 of the Weimarer Arnim-Ausgabe) will inspire undoubtedly a lively discussion in the Neuen Zeitung für Einsiedler, especially, since the journal was intended — as Arnim emphasized in his preface — to render the time of Napoleonic oppression more bearable with the publication of cultural and aesthetic writings.
The Neue Zeitung für Einsiedler offers enthusiasts and academicians of the romantic era the opportunity to engage both in the »whimsical medley« and the serious discourse od romantic aesthetics.

Roswitha Burwick is professor emerita of German Studies and Distinguished Chair emerita of Modern Languages at Scripps College, CA. Her areas of research are German romanticism, especially Achim von Arnim, whose collected essays and writings in natural science she is editing in the Weimarer Arnim-Edition. Her publications include essays on Achim von Arnim, Bettina von Arnim, Caroline von Günderrode and fairy tales. She is the Vice President of the International Arnim-Society and co-editor of Pacific Coast Philology, the journal of the Pacific Ancient and Modern Language Association.

Anna Sievert is completing her MA in German Studies at the Heinrich-Heine University in Düsseldorf with the concentration on Achim von Arnim and Editorial Studies. Besides German Studies and Editorial Studies, she was also enrolled in Romance Studies and Antique Culture. As Research Assistant, she contributed to various historic-critical editions, foremost, the digital Faust-Edition.