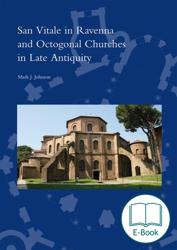 San Vitale in Ravenna and Octogonal Churches in Late Antiquity

E-book 54.0 MB
This book examines the octagonal churches of Late Antiquity from the origins of the type in the fourth century to its sixth-century culmination in its most famous example, the church of San Vitale in Ravenna. The buildings, limited in number and many overlooked in modern scholarship, served several functions including funerary oratory, martyrium, and cathedral, though most were martyr or memorial shrines. Beyond addressing questions of function, architectural design, structural solutions, chronology, literary sources, and architectural symbolism are also studied.

This book represents the first complete study of the octagonal churches of Late Antiquity (ca. 300-600 C.E.). Starting with the origins of the type found in small funerary chapels of the fourth century, the book examines the physical and literary evidence for 35 churches of the type, which saw its culmination in the construction of the church of San Vitale in Ravenna, dedicated in 547. Few of these buildings remain standing; several are known from nineteenth-century reports or more recent excavations and others are known only from literary sources that mention or describe them. The study demonstrates the relative rarity of the type in this period and notes that most of these churches served a funerary or martyrium function, marking the sites of the death or burials of certain Christian martyrs. A few were erected as memorial structures, marking important Christian sites such as the birthplace of Jesus Christ at Bethlehem and the House of Peter in Capernaum. The exception is the octagon at Antioch known as the Great Church appears to have functioned as the cathedral of that city, Numerous architectural drawings and color photographs illustrate the churches. During the sixth century, some of these churches were retrofitted to house regular liturgical services and the new churches of that century were designed to house both martyr shrines and the standard liturgy. Attention is also given to the design process of these buildings, noting that their octagons are usually based on diameters of numbers of feet divisible by ten and proportional schemes based on simple ratios such as 2:1, 3:2, and 5:3. The chapter on San Vitale demonstrates how its design was based on these simple ratios and identifies the unit of measurement used in its construction as the Byzantine foot. The book is intended for scholars and students of Byzantine and Late Antique architecture, as well as for those interested in larger questions of Architectural History, Byzantine history, material culture, and religion.