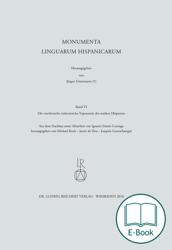 E-book 10.5 MB
„In Palaeohispanic studies, the discipline that studies the fragmentary remains of the pre-Roman vernacular languages of the Iberian Peninsula, the late Professor Jürgen Untermann (U.) held and, after his death in 2013, still holds a pre-eminent place. In the last half century, he was the leading figure in the discipline, both as regards the number of publications from his own hand, and as regards the work of others that he inspired directly as teacher and mentor, or indirectly. Among his countless achievements is the foundation of the series Monumenta Linguarum Hispanicarum (MLH)
for editions and lexicons of what remains of these languages. The Monumenta, to the greatest part written by himself, were milestones for the research into the various pre-Roman languages because they established a firm and easily accessible corpus of the surviving texts. (...) this new volume gives a powerful sign of life of the series and the foreword of the present book informs us that another one, a lexicon of the Iberian inscriptions, is currently in the making.“