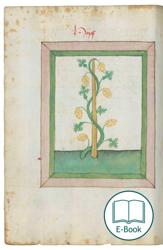 E-book 194.1 MB
Before the middle of the fifteenth century the Munich physician and author wrote an herbal that describes the medical efficacy of more than 170 drugs drawn from plants and animals. With its large format pictorial representations of animals and plants, it is the only completely illustrated herbal from the incunable period in the German language. The text is presented here for the first time in a critical edition. Information about the author, the transmission and textual history, as well as a glossary complement the edition. Furthermore, a representative selection of 64 full-page color reproductions is appended from the lead manuscript used as the basis for the text.
The herbal of the Munich physician and writer Johannes Hartlieb († 1468) occupies a special place in the medical literature of the Middle Ages, for it is the only comprehensively illustrated herbal from the incunable period in the German language. Hartlieb, who was educated in Padua and was personal physician to the Bavarian dukes Albrecht III and Siegmund, put his herbal together before the middle of the century. What is special and innovative about this work, which encompasses more than 170 chapters, are the illustrations of the drugs. They are present in all the extant manuscripts and form an integral part of the work.
The structural framework for the sequence of chapters in the herbal is formed by the alphabetically arranged section about herbs from the “Buch der Natur” by the Regensburg cathedral canon Konrad of Megenberg († 1374), whose text Hartlieb took over word-for-word almost in its entirety. In addition, he enriched his work with 76 additional chapters on drugs, arranged as a rule alphabetically in a block at the end of each letter of the alphabet. Sources have been found for only a small number of these additional chapters. Nonetheless, it must remain an open question as to whether the remaining chapters are an original contribution by Hartlieb to this herbal; it is more probable that they are derived from a source that has not yet been identified. Hartlieb departed from the alphabetical principle of arrangement in his opening chapters, which have drugs derived from animals as their content. Here Konrad also turned to the encyclopedia of nature by Konrad of Megenberg, but in this case he excerpted only the medically relevant portions of the corresponding chapters on four-footed animals.
The first critical edition of this text on the basis of the entire tradition known to us today fulfills a long-recognized gap in the literature. Until now there have only been reprints of a fragmentarily transmitted manuscript from the Upper Austrian State Museum at Linz and a text witness from the Princely Salm-Salm’sche Library in Anholt that was only very recently found. Information about the author, the transmission and textual history, as well as a glossary complement the edition. The significance of the illustrations for this innovative herbal type was taken into account to the extent that a representative selection of 64 full-page color reproductions of animal and vegetable drugs could be added. They are derived from the lead manuscript from which the text is drawn. The illustrations make it clear that the animals and plants are not drawn from nature but rather in keeping with the iconographic tradition.