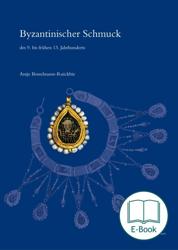 E-book 164.1 MB
Byzantine luxury objects have been neglected in research for a long time, despite the legendary reputation they already held during the Middle Ages. This volume analyses the gold, silver and bronze jewellery of the 9th to early 13th centuries in an interdisciplinary study. An illustrated catalogue presents some 250 dated objects, which are placed into a broader context through hundreds of comparative examples and the inclusion of visual and written sources.
The four hoards and numerous individual finds are examined in terms of materials and techniques, typology and iconography, style and ownership, as well as application and function. This provides, not only insight into areas of everyday life, but, especially in the gold jewellery from the Preslav treasure, includes references to imperial regalia and representation, as well as diplomatic gift exchange in the Middle Ages. Overall, a solid foundation for the dating of context-less objects is provided. The book is indispensable for archaeologists and museum curators, as well as students and lecturers in art history and archaeology.
In the middle ages, Byzantium was the epitome of luxury and opulence. Many precious objects have been handed down to us, such as silk textiles, vessels or gold icons, however, the jewellery has hitherto been largely neglected by researchers. This volume now presents the dated Byzantine gold, silver and bronze jewellery of the 9th to 13th centuries in an illustrated catalogue of over 250 pieces. The jewellery either comes from the four discussed hoards or single finds from archaeological excavations in Bulgaria and Greece. Many other pieces can be dated on the basis of their inscriptions and monograms. This material basis is compared to hundreds of pieces of jewellery and other artefacts, not only from Byzantium, but also from other medieval regions, including the Kievan Rus and Islamic states, and is in this way placed in a much larger context. The written sources were also consulted for an exhaustive study of the subject. The visual sources have also been analysed and brought together in a separate catalogue. In the process, several forgeries and replicas have been identified and excluded, and doubtful datings have been re-assessed.

The jewellery has been studied from every possible angle, for example with regard to materials and techniques, typology, iconography and style. In addition, the social strata of the former owners or wearers has been analysed, as well as the application and function of jewellery such as the use as magical amulets or perfume containers. Through this material we can gain insight into areas of everyday life, as well as courtly culture. Especially the gold jewellery of the Preslav treasure provides information on imperial representation and insignia, as well as the diplomatic gift exchange in the Middle Ages.

Problematically, the jewellery is not of homogenous quality and is in comparison to the length of the period dealt with quite sparse. However, we can now establish a typology and describe the style of middle Byzantine jewellery, providing a solid foundation for the dating of objects which have been detached from their original context. Consequently, this volume is indispensable for (field) archaeologists, museum curators, as well as students and lecturers of art history and archaeology.

The book is based on the author's PhD which has been expanded and re-worked for this publication. The PhD was awarded the Juliana-Anicia-Prize and the Dr.-Walther-Liebehenz-Prize.