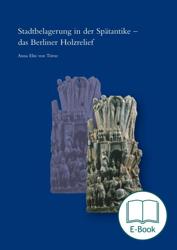 E-book 11.4 MB
Since the first publication about it in 1901, this unique wooden relief has been attributed to the Coptic maker because it was discovered in Egypt. The precise meaning of its richly detailed and impressive imagery, however, had remained shrouded in obscurity. The iconographic and stylistic analysis contained in this volume draws on comparative studies of material artifacts to reveal that the wooden relief belongs to Western Roman art of the fifth century. The relief portrays the suppression of the usurpation of John and his Hunnic cavalry troops outside the city gates of Ravenna by the Roman legionaries of Galla Placidia in the summer of 425 A.D. This historical revision places the relief in a new research context.
In front of a steep, impressive city silhouette, Roman legionnaires fight fleeing horsemen who are dressed in exotic costumes. Above the fray, noble dignitaries have been hanged in a brutal manner. At the top, the ruling couple sit enthroned under a canopy-like arch, next to them stand three tall men, and tiny spectators watch the struggle from inside a building.
Who is fighting whom, and who is the unusual royal pair – a woman and a young boy? Is it a depiction of a historic battle in front of an existing city or, as studies usually assume, a biblical, symbolic struggle? Since the unique wooden relief was bought some 100 years ago, scientific research has not been able to find convincing answers to these questions.
The relief has found its way to Berlin on a journey full of adventure: Like many other pieces of art made from organic material, the Berlin relief survived in the hot dry climate of Egypt’s desert where it was found at the end of the 19th century and then came with a Greek art dealer to the art markets of London. There, it was purchased in the late 19th century by the Viennese art historian Josef Strzygowski on behalf of Wilhelm von Bode to be part of the collection of ancient Christian-Byzantine statuaries and minor arts of the Bode Museum (formerly known as Kaiser-Friedrich-Museum).
Ever since the first publications about it in the year 1901, the wooden relief was attributed to the Coptic arts because it was discovered in Egypt. Its impressive display full of details, its style as well as its age, however, have been a mystery. Even its supposed Coptic origins never caused any doubt among researchers and these repeated in subsequent publications for many years.
Through a new material, iconographic and stylistic classification that also draws on a comparative analysis of written sources, Ms. von Törne has been able to prove that the relief shows no Coptic influences whatsoever. Instead it belongs to Western Roman art of the 5th century.
Key to this finding are the two figures under the imperial arch. According to their physiognomy and the costumes (Chlamys), the right figure shows a young boy and the left figure shows a finely clothed lady. The comparison of the depicted figures and historic sources led to the conclusion that the couple must be Empress Galla Placidia and her son Valentinian III at a young age. During the time of his childhood, only one battle between Roman legionnaires and foreign horsemen took place, and that is the suppression of the usurpation of the Western Roman rival John in the year of 425 CE outside the gates of the Italian city of Ravenna. That spring, John had hired Hun troops on horses, and they are depicted in impressive detail on the wooden relief. After his enthronement in October of 425, Valentinian is generally depicted with his imperial diadem. Because the diadem is missing in the wooden relief, it must have been cut in summer or autumn of 425.
Based on these new findings, it is possible make substantiated statements both about the commissioner and the reason for the commission. Thus, Ms. von Törne is able to place the wooden relief of the Bode Museum in a completely new and now accurate historical context.

Studies in Art History and History in Frankfurt, Bamberg, and Berlin and finished completed these in 2008 with a doctoral degree awarded by (name of university). During her studies she focused on early Christian arts and history, in particular on sarcophagi, mosaics, and historic reliefs. She is also interested in architecture of the 1920s and 1930s, in particular the Bauhaus movement.