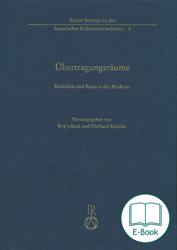 E-book 5.3 MB
In this volume, whose authors explore conceptions of space from the 18th to the 20th century, focusing on the role of the body and the senses as well as the importance of the mediality of space, putative new forms of energy and medial trance. In the interface of physiology and physics, electricity and ecstasy, modern spaces of transference can develop.

That the experience of space and time always depends on the conditions of transmission through the media becomes apparent when we consider the revolutions in media technology in the 19th and 20th centuries. More than that, spaces are even created through media, when new technologies of transmission generate fantasies about the structure of the space that they bridge. In connection with that we must consider the perception of the relationship between spatiality and sensual perception, for to this day revolutions in media technology turn out to be linked to the attempt to increase the organic functions of the sensory organs or even to expand them into the extrasensory. As a quasi-countermovement and a complementary tendency, corporeality gains new significance parallel to the development and refinement of technical transmission media: The body as a medium is physiologically and psychologically surveyed with more precision than ever with regard to its abilities of sending, receiving, and transmitting.

The volume “Übertragungsräume” focuses on a field of discourses and practices which is demarcated by the corners space – humans – mediality: In which areas of discourse and society did the knowledge of spaces of transmission develop? Which ontological status was ascribed to these spaces? What consequences did fantasies of all-pervasive aetherial fluids, rays and waves have for popular and academic concepts of space? In their oscillation between scientific/technical and religious/transcendent aspects, medial spaces are a challenge for cultural research on space and spatiality.

The papers in this volume discuss, among other topics, philosophical-physiological speculations in Herder, considerations of space-theory and communication technologiy in Kleist, the physiology of the senses in 19th century German science, the genius of Nikola Tesla, the retrovisionary revival of ancient Rome by Alfred Schuler, the debates between Einstein and Bergson, Walter Benjamin’s theory of the media, the energetic cosmology of Wilhelm Reich, experiences of space through dance and meditation in Erwin Straus and Karlfried Graf Dürkheim as well as somnambulistic and psychopharmacologically evoked journeys through space. The authors are cultural researchers of various disciplines.