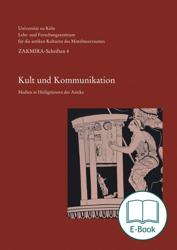 E-book 23.2 MB
Media research has become a common subject and method for various academic fields. But there is, so far, no such study dealing with media research in the field of archaeology. This volume compiles contributions from authors covering different possible aspects and directions. However, it is far from being a systematic study, but aims to open the field for further research.
The present volume presents an idea of the complexity of the context and layers of communication, votive offers were involved in during ancient times. It becomes apparent, that their specific communicative quality formed an integral and indispensable part of ancient sanctuaries.
At least the pagan ancient world has to be classified as a world, in which the communion between gods and human in the sanctuaries was mediated in a specific medial manner. In this context there are a multitude of communicative devices, and situations imaginable. Without laying claim to totality it is possible to distinguish between four main spheres of communication at and in sanctuaries. First there is the sphere of direct spoken communication in petitions, rituals, oracles but also as part of the communication with other participants of the ritual act. Besides there is the documented linguistic-textual communication for example in preserved texts and archives. As a third sphere there is mediated communication as part of the ritual practice, e.g. in processions, or a votive or consecrative offering. Finally there is the domain of symbolically represented communication which is a strong factor in the media presence of a sanctuary. This sphere includes, among many others, architecture, equipment, cult statues, inscriptions, ornaments and music. Disregarding any distinction between technical an non-technical means of communication, i.e. understanding the term “medium” as a synonym for the carrier or mediator of some form of communication gives rise to the attempt to view sanctuaries as part of the media history of antiquity. By not limiting the term “medium” to the technical or material aspects of information transfer but rather applying it to the ancient symbol systems and their communication it is far more than a mere modernism.
Therefore the focus of this volume lies on the connection between cult and mediality resp. the different types of communication at, inside of and about sanctuaries. The articles of the first part point out in various ways that sacred places are more than locations where ritual acts are performed and the divine is represented. Instead they understand sanctuaries as complex systems of communication where theological, political, economical and other messages are conveyed through linguistic or graphical media.
The articles in the second part are based on the common assumption, that votive offerings form a very distinct example of communication in sanctuaries because they have two addressees, namely the deity and the other visitors of the sanctuary. The articles shed light on different aspects of the votive culture of classical antiquity and cover a wide chronological and geographical spectrum encompassing the entire Mediterranian and up to late Antiquity. The common question addressed in these articles is that of the communicative value of votive offerings.
Prof. Dr. D. Boschung