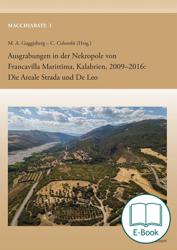 E-book 49.4 MB
Since its discovery in the 1960s, the Macchiabate necropolis of Francavilla Marittima in northern Calabria has been a key archaeological site when it comes to the encounter between the Greeks and the indigenous Iron Age cultures in southern Italy in the 8th century BC. 40 years after the end of the first excavation by the Italian archaeologist P. Zancani Montuoro, the University of Basel resumed the exploration of the burial ground with the aim of embedding the old excavations into a new basis and to shed new light on the beginning of the cultural exchange between the indigenous and the Greek actors of the migration process. In this volume, the results of the excavations from 2009 to 2016 are presented and located in terms of cultural history.
The Iron Age site of Francavilla Marittima in northern Calabria is one of the most important points of contact between the local population and the Greeks and Levantines who expanded to Italy in the early 1st millennium BC. Since the discovery and initial research of the settlement and its necropolis on the Macchiabate plateau by the Italian archaeologist Paola Zancani Montuoro, the site has played a key role in the discussion about the early processes of cultural exchange and appropriation in the western Mediterranean. The decisive factor here is the fact that around 720/10 BC, in about 10 km distance from Francavilla Marittima and thus within sight, the Greek colony Sybaris was founded. How this permanent Greek presence has affected the role and self-image of the indigenous population in the hinterland of the colony is the subject of ongoing controversy. The model of a rapid and radical change of the native cultural area into a Greek chora is contrasted with the thesis of a gradual merging of the native with the Greek world. The graves in particular played an important role as closed contexts. The Basel excavations in the necropolis aim to provide a new basis for assessing the cultural transformation process on the threshold from the Iron Age to the colonial era. In this volume, the excavation results from 2009–2016 in the burial areas Strada and De Leo are published. They testify to the variety of reactions to the foreign in the indigenous burial ritual and suggest that the permanent settlement of Greeks on the coast has profoundly changed the indigenous cultural fabric in the hinterland. Although there were some spots in the necropolis with new graves dating to the 7th century BC, the Strada area proves the discontinuation of burial activities around 700 BC. Conversely, the local settlement community was in a state of upheaval at this time. The present publication thus makes a contribution to researching early migration and mobility processes in the Mediterranean region and the related question of cultural identity.
Martin A. Guggisberg (*1960) is the professor of Classical Archaeology at the University of Basel. After studying in Basel, he spent several years as a post-graduate in Rome, London, and Marburg and was an assistant at the University of Bern. His research interests include the archaeology of early elites, cultural exchange processes in the Meditteranean, Italy in the Iron Age, Celtic Art, and the Art of Late Antiquity. Since 2009 he has been leading the excavations at the University of Basel in Francavilla Marittima, Calabria.

Camilla Colombi (* 1980) is a researcher at the Rome Department of the German Archaeological Institute (DAI). She studied Classical Archaeology, Near Eastern Archaeology, and Ancient History in Basel and received her doctorate in 2014 with a thesis on the Etruscan necropolis of Vetulonia during the Orientalizing period in Basel. After staying abroad in Florence and Rome, she was an assistant at the University of Basel. Her research interests include Etruscology and Italian archaeology, the pre-colonial period in Southern Italy, burial ground archaeology, cultural contact research, and the digital humanities.