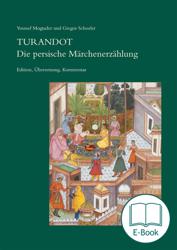 E-book 8.0 MB
The story of Turandot is one of the most famous and influential tales from the Islamic Orient. It has been reflected in numerous artistic adaptations as well as in popular tradition.
Contrary to a widely held opinion, Turandot is not a Chinese tale, but a Persian one. The earliest traceable stories of the princess who has all suitors incapable of solving her riddles put to death appear around 1200 AD in the Persian-speaking world. One of those stories was authored by the Persian-Indian writer ʿAufī (d. c.1232); it already contains all the essential components of the later story.
This prototype by ʿAufī as well as a later anonymous version of the tale, in which the subject matter is cast into the shape of a thrilling novel all European versions eventually trace back to, are now presented by Youssef Mogtader und Gregor Schoeler for the first time in a critical edition with an annotated translation and commentary. In an introductory essay they draft the history of the Turandot theme from its beginnings to Puccini's opera libretto.
The critical edition and translation of the two texts grant specialists as well as the general public access to a theme of world literature: Gozzi, Schiller, and in the 20th century Brecht and Hildesheimer wrote plays on Turandot; several opera libretti embraced the subject, and Busoni and Puccini are but the two most famous of a number of composers who set Turandot to music.
By the translation and commentary, the original Persian Turandot texts are made accessible to international narratology. Narratologists will take an interest, inter alia, in the structure and contents of the riddles, which are of interest to the scholars of Islamic studies, too: the various questions concerning religion show what educated Muslim laymen knew about their own religion and about the beliefs of their non-Muslim fellow countrymen. The story itself gives insight into the customs and religious attitudes of the Iranian Muslim elite at that time, for instance the occasions on which the consumption of wine was considered unobjectionable – despite the Islamic prohibition.
Those interested in Persian literature will welcome the edition and the introductory essay especially as contributions to the study of popular narrative prose literature ('middle literature'), the underexplored literary genre both the presented Turandot texts belong to. Linguists will find new material for their study of grammatical and stylistic peculiarities (levels of style, use of images and rhetoric devices, vernacular influences) of two texts from different periods. Students of Iranian and Persian Studies will find the prose passages of the story useful reading exercise.
Furthermore, all lovers of stories and fairy-tales will be delighted that by these translations an oriental tale that is in no way inferior to the best stories from the One Thousand and One Nights is made public.
The texts are supplemented by five magnificent Persian miniatures showing great scenes and moments of the story. Since some of the paintings are published for the first time here, the book will finally also be of interest to art historians.