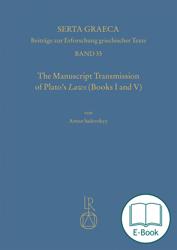 The manuscript transmission of Platos laws (books I and V)

E-book 5.7 MB
The study is dedicated to a detailed evaluation of the existing manuscript evidence of Plato's Nomoi as well as to the explanation of the textual tradition of this work. The mutual relationships of the existing textual witnesses are explored in detail with the intention of determining their role in the reconstitution of the text. At the same time, the focus is on the copyists and scholars who produced, emended and annotated these manuscripts.
The present work is devoted to detailed evaluation of the extant manuscript authority of the Laws as well as to clarification of this work’s textual transmission. The mutual relationships of the known manuscripts are thoroughly investigated, assessing their value to the reconstitution of the text. At the same time, the focus is on the scribes and scholars who produced, emended and annotated these manuscripts.
In more detail, first and foremost, the research deals with the primary manuscripts from the IX century, i.e. Parisinus gr. 1807 (=A) and Vaticanus gr. 1 (=O). The main aims are to establish their relationship and consider evidence to their non-extant sources, clarifying the status of (in)dependence. These two codices are also discussed individually with an emphasis on the distinction of later correcting hands and that of the scribe himself. Moreover, it is deduced, to the extent possible, which corrections have been taken from a manuscript other than the exemplar, and which ones copied from the same exemplar.
Subsequently, the study includes interrelations and dependencies of all other (secondary) manuscripts belonging to the “A” and “O” families. Of especial interest are Marcianus gr. 188 containing abundant corrections by Georgius Gemistus Plethon, some of which go back to a lost ancient codex, and Marcianus gr. 187 with a large number of noteworthy marginal notes in the hand of Cardinal Bessarion.
Such important additional aspects of the transmission as the XV century Latin translations and the XVI century printed editions are also covered. Their texts are respectively investigated and compared to their most probable sources.
The study also foresees the indirect tradition, particularly direct quotations from the Laws found in ancient authors which at times offer readings superior to those of the primary witnesses.
This work thus represents an attempt to deepen and refresh the Platonic studies from the perspective of textual criticism and manuscript studies as well as to examine the text of the Laws in great detail. This is particularly relevant given that not all extant manuscripts of this work have been collated and that some earlier available collations are not always reliable or complete.
Anton Sadovskyy

07/2020 – 12/2021
Postdoc researcher in the long-term academy project “Etymologika. Order and interpretation of knowledge in Greek-Byzantine lexica up to the Renaissance. Digital development of manuscript production, users and cultural environment” at the University of Hamburg under the sponsorship of the Academy of Sciences in Hamburg

10/2019 – 06/2020
Postdoc researcher in the part-project C06 „Greek manuscripts of Aristotle in instruction and interpretation practice” of the Collaborative Research Centre 950 „Manuscript cultures in Asia, Africa and Europe” at the University of Hamburg

10/2016 – 09/2019
Member of the graduate school of the Collaborative Research Centre 950 „Manuscript cultures in Asia, Africa and Europe” at the University of Hamburg

09/2007 – 08/2016
Researcher and lecturer for Latin, Ancient Greek and Modern Greek at the Ivan Franko University of Lviv (Ukraine), Department of Classical Philology