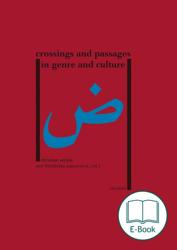 Crossings and Passages in Genre and Culture

E-book 55.1 MB
Crossings and Passages in Genre and Culture scrutinizes the fascinating and diverse wanderings forms of artistic expression, in particular literature, have taken through different cultural fields, both within and outside a specific geographical region or historical époque. Approaching the topic with a flexible genre concept and avoiding any superficial group classification of texts, the common focus of the essays collected in this volume is to explore the dimensions and potentiality which cultural encounters release in the field of genre transformation.