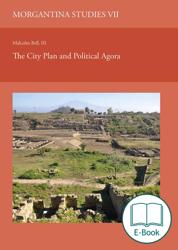 E-book 46.9 MB
The orthogonal city plan was adopted in the mid-fifth century BCE and implies a democratic constitution. Almost entirely excavated, Morgantina’s large agora offers a detailed picture of the civic architecture of an early Hellenistic western Greek city. Ten major civic monuments and buildings are described; these include meeting places for the assembly and council, and three large stoas housing a law court, public offices, and a prytaneion. Several structures document new Greek building types, including a public bank and an agoranomion or headquarters of the agora supervisors.
Excavations beginning in 1955 have made Morgantina into one of the most extensively known ancient cities in Sicily. Volume VII in the series Morgantina Studies describes both the new urban plan of the fifth century BCE and the city’s public center or agora, where ten major buildings were added between the late classical and early Hellenistic periods, ca. 400-200 BCE. The ambitious city plan, probably owed to the charismatic indigenous leader Douketios, is shown to reflect the democratic movements of the early century BCE. The plan is characterized by lots of equal size and an unusually large agora for political assemblies.
From the start the agora at Morgantina has been a focus of the U.S. excavations. Most buildings belong to an ambitious program adopted ca. 250 BCE, when the city lay under the sway of Hellenistic Syracuse. This was the age of Archimedes, Theokritos, and King Hieron II, whose economic and political reforms are perceptible at Morgantina. The building program exploited the generous available space. The result was a scenographic assemblage of monuments that took advantage of sight lines and changes in level to create a visually coherent whole. Volume VII of Morgantina Studies presents the material evidence for this major Hellenistic complex, offers reconstructions in the form of plans and drawings, and includes catalogues of objects from each structure. Political institutions are identified along with unusual building types and innovative details.
While the agora of Morgantina offers a unique window on the lost civic architecture of Hellenistic Syracuse, it also documents the drastic local consequences of the second Punic war. Falling to Rome in 211 BCE, the city was depopulated and assigned to a band of mercenaries. Buildings that formerly housed political institutions were now largely given over to commerce and industry. Morgantina thus offers dramatic and detailed evidence for the traumatic effects on one Sicilian city of the transition from Syracusan to Roman rule.
The book is intended for the interested public of scholars and students of ancient architecture and urbanism. Analysis of the relationship between architecture and political institutions will make it of interest to historians, as will the documentation of the specific consequences of depopulation and mercenary resettlement. Included is a study of the geology of the site by the late Sheldon Judson of Princeton University.

The series Morgantina Studies presents the results of American excavations at the central Sicilian city of Morgantina. Previous volumes (published by the Princeton University Press) were dedicated to terracotta figurines, coins, pottery kilns, Hellenistic and Roman ceramics, archaic cemeteries, and the indigenous Iron Age settlement. Future volumes will appear under the auspices of Verlag Ludwig Reichert; studies are anticipated of the material culture and architecture of the archaic and Hellenistic settlements, where archaeological excavations are continuing.