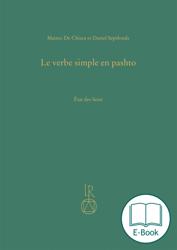 E-book 4.1 MB
In this work, the Authors provide a detailed analysis of the Pashto Simple “Naked” Verbs, i.e. all not suffixed simple verbs, and the linguistic dynamics at work still nowadays. The classification of used Simple “Naked” Verbs in three main groups (those belonging to the “norm”; those whose position is changing and can be located in a “zone frontière”; those showing a complexification linked to the aspect) will be useful and helpful for Pashto students and scholars, for researchers in the field of Iranian philology and for linguists.

Pashto is an Iranian language spoken by almost 50 million speakers in eastern Afghanistan, western Pakistan, as well as in an important diaspora. Pashto, official language of the Afghan refugees along with Dari (Afghan Persian), is nowadays the focus of a growing interest, not only in the humanitarian field but also in linguistic studies.
In this work, following the preceding volume on the Pashto verbal system, the Authors provide a detailed analysis of the Pashto Simple “Naked” Verbs, i.e. all not suffixed simple verbs, and the linguistic dynamics at work still nowadays. Used Simple “Naked” Verbs may be distributed among three main groups: a) those belonging to the “norm”, i.e. irregular and regular verbs; b) those whose position is changing and can be located in a “zone frontière”; c) those showing a complexification linked to the aspect, i.e. the two verbalizers and the mixed verbs. After the long and in-depth introduction, the fiches of all Simple “Naked” Verbs are presented and offer complete dialectological, typological and lexicographical information, as well as ample phraseologies. The verbs are organized in two main chapters, if the verb is used or only appears in the dictionaries. The appendixes provide indexes of all Simple “Naked” Verbs and of the French meanings. A final glossary allows the reader full understanding of the grammatical definitions.
The manifold audience to which this work addresses is composed principally by scholars and researchers involved in the fields of linguistics and Pashto and Iranian studies, but also by students of Pashto language and by all those working in the humanitarian field and with refugees.
Matteo De Chiara (Rome, 27/9/1976), PhD in Iranian Studies at the University of Naples « L’Orientale », is Maître de Conférences HDR at the Inalco of Paris, where he teaches Pashto language and Iranian philology. He participated to many research projects in collaboration with Adriano V. Rossi and other scholars in the domain of the Iranian studies (2001-2010). He benefited of a research grant at the University of Mainz to study the Khotanese Sudhanāvadāna (2008-2010).