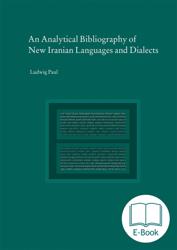 Von Ludwig Paul With the cooperation of Pejman Firoozbakhsh

An Analytical Bibliography of New Iranian Languages and Dialects

Based on Persian publications since ca. 1980

The volume aims to make accessible to international scholarship the diversity and richness of Persian publications on and in Iranian languages and dialects. The arrangement of the 27 linguistic groups follows a combination of genetic and areal/regional features that is explained in the introduction. The publications relating to each of these groups are divided into generalities, phonology, morphology/syntax, lexicon, and literature, sometimes with additional subdivisions. Each title is translated, or its main contents are summarized. The systematic part of the bibliography is supplemented by an alphabetical inventory (according to the authors' names). The introduction also offers an account of Iranian dialectology, with its history and main concepts, and is followed by an overview of recent non-Persian scholarship on Iranian languages and dialects. The volume concludes with an index of all names of places, tribes, and languages that occur in it.

The work presented here is the first of its kind and breaks new ground in Iranian dialectology and bibliography. It aims to provide a reference work for all disciplines that are interested in the languages spoken in Iran: Iranian, Turkic, Semitic and Kurdish studies. The comprehensive coverage of literature in minority languages and dialects also has the potential to provide new impulses to literary and folklore studies in these disciplines.
Ludwig Paul