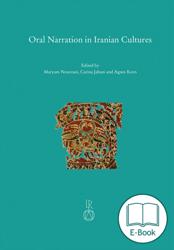 In the introductory part, Bo Utas discusses the use of multiple languages and diverse registers, comparing his father’s native Estonian-Swedish village in Ukraine to parallels in the Iranian sphere, and Ulrich Marzolph presents a survey of recent research on oral traditions in Iran and the challenges it currently faces.

The second part studies the interplay of written and oral patterns of text production and transmission connected to the Shāhnāma and its literary and narrative traditions. Carl Erixon examines passages referring to the sun, moon and stars that, he argues, represent poetic formulae with close parallels in ancient Indo-European languages. Kumiko Yamamoto applies a model developed to study oral traits in written text to a version of the Barzūnāma found in an unpublished manuscript at the French national library, and Julia Rubanovich studies the perception and representation of the written text in the Iskandarnāma and the Dārābnāma. Finally, Margaret Mills looks at the relationship of oral narrative performances from different genres in Afghanistan to written Persian texts.

Concerning oral traditions in lesser-studied Iranian languages, Sara Belelli presents a comparative study of Southern Kurdish folk tales about the “Innocent Persecuted or Unfortunate Heroine”. Sabir Badalkhan compares the epic about the Baloch hero Mir Chakar to parallels in the Shāhnāma and the Sindhi epic tradition. The heroes from the Balochi epics are also reflected in popular sayings containing place names, as shown by Moosa Mahmoudzahi. From a more linguistic perspective, Carina Jahani and Jaroslava Obrtelová study to what extent clause-combining strategies in Balochi differ between oral and written narration, and Maryam Nourzaei compares the extent to which oral traditions survive in different Balochi-speaking areas. Erika Friedl’s account of how her long acquaintance with a Luri community influenced the way they tell their stories concludes the book.

Agnes Korn:
Born 1967. Studies in Indo-European studies, Indology and Iranian studies in Hamburg and Vienna (MA 1996), doctoral studies in Comparative Linguistics / Indo-European Studies in Frankfurt a.M. (PhD 2003), habilitation in Comparative Linguistics in Frankfurt a.M. (Privatdozentin 2010).
Lecturer of German as a Foreign Language in Banská Bystrica / Slovakia (1995-96), work for the Austrian Academy of Sciences / department of Iranian studies (1996-97) and on a lexicographical project Persian-German at the University of Graz (1996-98).
Researcher at the Department for Comparative Linguistics / Empirical Linguistics at the Goethe Universität Frankfurt a.M. (1998-2015).
Since 2015 senior researcher at the National Centre for Scientific Research (CNRS) in Paris / France.
Main interests: diachronic and synchronic grammar of Iranian languages, description and documentation of minority languages.