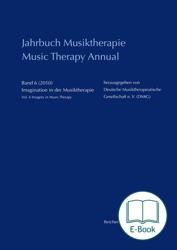 E-book 5.1 MB
This year's “Music Therapy Annual” focuses on “Imagination in Music Therapy.” The articles present different definitions of the concept of imagination, but also different theoretical approaches (including cultural philosophy, psychoanalysis, and morphology), and forms the basis on which the phenomenon is dealt with therapeutically. The control of the sense and non-sense in what is dreamed seems to be largely eliminated during sleep. When people start daydreaming to the sounds of music during therapy, this presumably evokes the same mechanisms of cause as in sleep. “Letting go to the music” brings about - albeit to a lesser extent - a reduction in cognitive recognition and thus creates the possibility that unconscious form can take hold. The product of this unconscious activity, as shown in the following contributions, can appear as both a mental image or as poetry (both subject to verbal communication), or appear as a commented or non-commented painted picture. The music therapy possibilities that induce these fantasies are diverse and methodologically very different. All of the articles make clear that patients present their subjective inner or outer world in these imaginings and enter into a dialogue of understanding with the therapist.