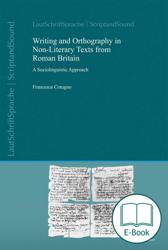 Writing and Orthography in non-literary Texts from Roman Britain

E-book 4.2 MB
The analysis of orthographic variation and the writing habit presented in this book represented a heuristic tool for the study of the sociolinguistic scenario of Roman Britain, sketching the different micro-histories of Latinization according to a new, ground-breaking, perspective. As a matter of fact, the assessment of the different orthographic variants may be revealing of the phenomena of language contact and interference; orthographic misspellings and idiosyncratic variants, which also varies according to the text type, writing materials, and writers, allows the sketch for different micro-histories of Latinization
The main aim of this book is an analysis of the orthographic variation observed in non-literary documents written on tablets in Roman Britain (i.e. Londinium-Bloomberg stylus tablets, the Carlisle and Vindolanda ink tablets, and curse tablets) taking into account any possible glimpse of language contact between the mother-tongue of the writers, conveniently hidden by the prestige of the Latin language and culture. These documents have been produced during the Roman control of Britannia, which lasted from 43 to about 410 CE, and was often characterised by a difficult relationship between the local population and the Romans. These non-literary documents show how these realities are fragmented in micro-entities, each of them carrying different linguistic, cultural, and historical backgrounds that we can summarize as micro-histories of Latinization. The topic of the “micro-histories” has been tackled according to the analysis of the orthographic variation which arises as a brand-new heuristic perspective for the assessment of the possible cases of language contact. In Roman Britain such contacts occurred in different historical occasions and also according to different manners: There is the commercial hub from Londinium, before and after the destruction of Boudica; the auxiliaries from Carlisle and Vindolanda which were from the Celto-Germanic territories of the Roman Empire, the local population which eventually learned the cursing practice.
The thorough analysis of this significant assortment of non-literary documents, which includes wax stylus tablets, ink tablets and lead tablets, written in different scripts such as Old and New Roman Cursive and Capital writings, offers a first comprehensive account of the language variation available in these texts according to the linguistic and palaeographical perspective. The different corpora considered, with their different orthographic and linguistic features, represent different community of speech, and analysing them offers also important insights concerning language contact and linguistic interaction in a way that so far has not be done before. The non-literary documents written on tablet have been published in the years but strongly oriented in one direction, sometimes towards a historical and palaeographical perspective, other times towards a strict linguistic perspective. In this way, the orthographic and the sociolinguistic intricacies of the non-literary documents from Britain have been left aside. In this book, instead, the main phenomena of orthographic variations have been systematically analysed, offering an in-depth investigation of the phenomena, accompanied by a study of the single phenomena, comparing each occurrence with their classical counterparts, their historical and sociolinguistic background, and taking into consideration the previous scholarship and the evidence from Latin Grammarians. This book is therefore intended for academic purposes, addressing an audience of historical linguists, especially those interested in the sociolinguistic variability as intertwined in writing and speech.
Francesca Cotugno, Ph.D. in Philology, Literature and Linguistics (2018, University of Pisa—University of Gent), is Post-doctoral Research Fellow at University of Verona within the project PRIN 2017 “Parts of speech meet rhetorics: Searching for syntax in the continuity between the Middle Ages and the Modern Age”, whose Principal Investigator is Prof. Paola Cotticelli. Francesca Cotugno’s research interests focus on language contact and change, with a special attention to the Latinization of Britain and Celto-Germanic areas of the continent. She is currently working on Grammaticography and History of Linguistics, Historical Phonology and Morphology within the broader scenario of ancient Indo-European languages, together with Graphematics and the interactions between Linguistics and Palaeography. At the present time she teaches Phonetics and Phonology at University of Verona and Glottodidattica and Didattica della lingua italiana at Università telematica Guglielmo Marconi (Roma). Previously, she has been Post-doctoral Research Fellow at University of Nottingham and University of Oxford (being based at the Centre for the Studies of Ancient Documents) for the ERC project LatinNow (from September 2017 to January 2020), with Dr. Alex Mullen as Principal Investigator. She also worked as Lecturer for the Epigraphy Graduate Classes (for the temporary period of 01 February 2020 to 31 March 2020) at the University of Oxford. Previously, starting from 2014, she was part of the Research Unit at the University of Pisa (Principal Investigator Prof. Giovanna Marotta) that worked on the Sociolinguistic Database CLaSSES within the research project Linguistic representations of identity. Sociolinguistic models and historical linguistics (PRIN2010, prot. 2010HXPFF2_001, National Coordinator Prof. Piera Molinelli) with specific reference to the part concerning Roman Britain.