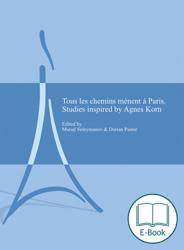 The book consists of a preface and an introduction, as well as chapters presenting novel research, influenced directly or indirectly by Dr Korn’s deep academic involvement. The chapters, each reviewed by one referee under a double-blind peer review process, deal with issues of etymology, historical language contact, morphology and syntax, typological modelling, and folk practices.

Bernard (pp. 15–24) explores the etymology of Māzandarān, the name of a province situated in Northern Iran. Chamot-Rooke (pp. 25–36) analyses the use and origin of smām, a previously unacknowledged Tocharian A lexical item. Gérardin (pp. 37–71) introduces a new typological approach to classifying and describing the valency of Georgian verbs. Jügel (pp. 73–91) suggests that linguistic areas with a dominant religious affiliation may be considered a factor influencing the historical dialectology of Persian. Kontovas (pp. 93–106) presents an overview of the reflexes of Proto-Iranian *w- in modern and classical Iranian languages with the intention of determining if language contact has affected their distribution. Mascagni (pp. 107–121) provides a comprehensive description of a traditional Baloch string instrument, the sorūd, and reflects on the process of repairing and tuning this instrument, which he has documented. Pastor (pp. 123–150) examines processes of degrammaticalization of the pronominal clitic =(e)š in colloquial Persian leading to the derivation of new lexical items. Rochant (pp. 151–163) proposes a new way of looking at the nominal inflection paradigm of Andi after analysing the behaviour of a formative encountered in specific lexical classes. Finally, Suleymanov (pp. 165–178) illustrates a phenomenon of syncretism in a Tat variety which codes possessor and source in an identical manner and delves into the question of its origin.

The current volume may be of interest to linguists specializing in Iranian and other Indo-European, as well as East Caucasian (Nakh-Dagestanian) and South Caucasian (Kartvelian) languages. The chapter documenting musical practices of the Baloch minority of Oman may equally appeal to ethnomusicologists.

Murad Suleymanov holds a Ph.D. degree (2019) in Linguistics from Université Paris Sciences et Lettres (PSL) – École Pratique des Hautes Études (EPHE). He is the author of A Grammar of Şirvan Tat (Reichert, 2020) as well as of several smaller publications mostly dealing with the Iranian and Turkic languages of the Caucasus. He is currently the administrative manager of the PSL-EPHE-affiliated Institute for Linguistic Heritage and Diversity (ILARA), where he teaches an introductory course in Turkic languages, as well as a lecturer of Azeri at the National Institute for Oriental Languages and Civilisations (INALCO, Paris) and of Judaeo-Tat at the Oxford Centre for Jewish and Hebrew Studies. He previously taught Azeri as an invited lecturer at Goethe University Frankfurt (2017, 2018) and at Higher School of Economics (Moscow, 2020). He has documented endangered varieties of Tat as part of the IMMOCAL project (2016–2022). Dr Suleymanov’s research interests include language contact, areal typology, variation and language change, language documentation and description, syntax, Iranian languages, Turkic languages, and languages of the Caucasus.