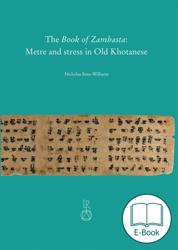 Zambasta_text.zip 1.1 MB
Khotanese, a language belonging to the Iranian branch of Indo-European, which was spoken in the first millennium CE, has a rich literature including the Book of Zambasta, a poetic exposition of Mahāyāna Buddhism in 24 chapters. This poem makes use of three metres, whose nature has been a matter of controversy for more than a century. While its first editor, Ernst Leumann (1859–1931), regarded Khotanese metre as essentially quantitative (moraic) and derived it from a Proto-Indo-European metrical system supposedly reflected also in the Greek hexameter and the Middle High German Nibelungenlied, other scholars have understood it in very different ways: as a purely stress-based metre related to that of poetry in some other Iranian languages; as an adaptation of Indian metrics; or as representing a transitional stage from a quantitative to a stress-based system. The present work offers a closely-argued new analysis, demonstrating that the metre is indeed based on the quantitative (moraic) principle, but with an obligatory ictus in the cadences which leads to the systematic lightening of certain unstressed syllables. The results shed light on the equally controversial issue of Khotanese accentuation and many other aspects of the language and its history. The book includes the complete text of the poem with interlinear scansion. Additional fully searchable text-files available online make it possible for any reader to check the arguments and results.
Nicholas Sims-Williams, born 1949 in Chatham, England, obtained his PhD at Cambridge in 1978 with a thesis on Christian texts in Sogdian. He joined the staff of SOAS University of London in 1976, becoming Emeritus Professor of Iranian and Central Asian Studies in 2015. He is a Fellow of several academies and similar bodies including the British Academy. In his research he focuses on the Middle Iranian languages of Afghanistan and Central Asia, taking an equal interest in the languages themselves, with their Indo-European roots, and in their Central Asian setting, with its stimulating mixture of languages, cultures and religions.