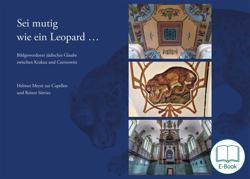 E-book 38.5 MB
In no other region has the Jewish faith found such graphic expression in the synagogues as in the historical landscapes of Galicia and Bukovina. Since the end of the Middle Ages the living conditions of the Jewish population had deteriorated, and people sought refuge in a return to traditional values ​​and in the hope of a return to Zion. Impressive photographs by Helmut Meyer zur Capellen and explanatory texts by Reiner Sörries reveal a rather unknown aspect of the Jewish world of art and spirit.
Reiner Sörries, born in Nuremberg in 1952, is a pastor, professor for Christian archeology and art history at the University of Erlangen and was director of the Museum for Sepulchral Culture in Kassel until 2015. In retirement he devotes himself primarily to Islamic and Jewish art. He lives and works in Kröslin on the Baltic Sea.