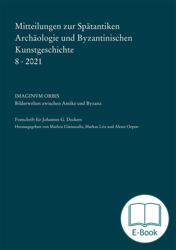 E-book 20.5 MB
This book is a commemorative publication on the occasion of the 80th birthday of Prof. Dr. Johannes G. Deckers, former professor of Byzantine art history at the Ludwig-Maximilians-University in Munich. The volume brings together a total of 18 contributions by colleagues from Germany and abroad. The majority of the essays come from one of Johannes Deckers' favourite, diverse fields of research in IMAGINUM ORBIS. These late antique and Byzantine worlds of images sometimes appear surprisingly familiar to the modern viewer, sometimes inaccessible and difficult to understand. Syntax and grammar of this pictorial language, i.e. its rules and the deviations from them, are the special interest of this volume. Therefore, there is a focus on individual studies of images, from the depiction of a Parthian, whose iconography ultimately influenced that of the early-Christian magicians, to the handling of destroyed images in the Middle East and Byzantine book illumination. In addition to fundamental considerations on the geographical origin of early Christian pictorial programmes (in Rome or on the periphery of the Roman empire), internationally recognised experts present partly unpublished and virtually unknown images and pictorial media that contribute to a better understanding of the imaginum orbis. Since Johannes G. Deckers does not approach the late antique and Byzantine period exclusively with the methods of image studies, a section on the "world beyond images" rounds off the anthology. In addition to a geographical breadth that ranges from spectacular a find from Bavaria to a contribution on the Holy Land to gifts from distant Armenia, the temporal dimension of the excerpts, which range from the era of Constantine the Great to the time of Venetian rule over Crete, also reflects the broad interests of the jubilarian.

The three editors of this volume see themselves as "students" of the jubilarian from very different stages of Johannes G. Deckers' academic teaching career. Alexis Oepen has been associated with Johannes Deckers since his earliest days in Munich and, like him, is a founding member of the Verein Spätantike Archäologie und Byzantinisiche Kunstgeschichte e. V. Markos Giannoulis received his doctorate from the jubilarian; Markus Löx came to late antique art history through him and led the association's annual trips to Cyprus and Rome with him.