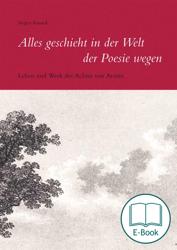 E-book 18.6 MB
I first encountered Achim von Arnim's work in the summer semester of 1968 while studying German philology at the University of Hamburg. In an advanced seminar on the theory of Romanticism, I wrote a paper on the story “Der tolle Invalide auf dem Fort Ratonneau”. This eventually led to my dissertation “Achim von Arnim-Nicht nur Poet”, which was published in 1976. In 1992, I co-edited the 6th volume of the “Arnim-Werkausgabe” published by Deutscher Klassiker Verlag. In 1991, together with other Arnim scholars, I founded the historical-critical “Weimarer Arnim Ausgabe” (WAA), which will soon publish volume 12 of “Der Preußische Correspondent”, which was edited by me. In 1995, I also founded the Internationale Arnim Gesellschaft” (IAG) with others, of which I was treasurer until 2013. I published numerous lectures on Arnim in the writings of this society, which accompanied the many colloquia held. I also wrote many essays for the “Neue Zeitung für Einsiedler”, the communication of the IAG. Since there has been no detailed Arnim biography oriented towards his works, I decided a few years ago to write this biography to conclude my Arnim research.
In this biography, I have tried to take into account all the texts printed during the author's lifetime and to add scholarly classifications of the specialist literature up to the present day for many of these texts. No biography of Arnim has appeared since Helene Kastinger Riley's work, which was published as a Rowohlt monography in 1979. However, in the past forty years there have been hundreds of important works on partial aspects of Achim von Arnim's works and I have tried to include as many results as possible in my work.
One focus of the biography is the many research results I have achieved in connection with my work on the “Preußischer Correspondent”, such as the realisation that Arnim is the creator of the word "Völkerschlacht" for the Battle of Leipzig in 1813 during the Wars of Liberation. Since numerous letters and personal documents from Arnim's life have also been published in recent years, many of these could also be included in the biography.
Jürgen Knaack
Jürgen Knaack, born in 1946, studied German studies, German literature and art history at the University of Hamburg from 1965 to 1973. He received his doctorate in 1973. He was employed by the Hamburg publishing house Gruner+Jahr from 1973 to 2003. From 1973 to 1979 he helped to set up the G+J press database. During this time he trained as a scientific documentalist in Frankfurt/Main and gave numerous lectures on the development of the G+J press database. From the founding of the art magazine "art" in 1979 until autumn 2003, he worked there as a documentary journalist. During this time, he wrote about 150 reviews and smaller articles for the magazine and built up an extensive art library. Parallel to his gainful employment, Knaack worked as a publicist and literary scholar and was, among other things, co-editor of the works of Achim von Arnim at the Deutscher Klassiker Verlag. Since 1991 he has been a contributor to the historical-critical “Weimarer Arnim Ausgabe” (WAA). In 1995, together with other Arnim researchers, he founded the “Internationale Arnim Gesellschaft” (IAG), of which he was treasurer until 2013. In 2005 he opened an Arnim memorial in Zernikow.