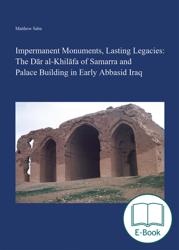 E-book 34.3 MB
This book offers a new interpretation of early Abbasid palaces as “impermanent monuments.” Synthesizing an array of sources, ranging from archaeological finds and classical Arabic literature to modern studies on the social and intellectual history of Islamic civilization, it reveals ways in which the Abbasid court designed, decorated, presented, and documented its palaces to leave lasting legacies of imperial power with what were considered at the time to be impermanent structures. In doing so, it sheds light on an architectural concept endemic to early Islamic Iraq that challenges popular notions of the monument as permanent and unchanging. The main palace of Samarra, known as the Dār al-Khilāfa, serves as the primary case study for this phenomenon, and the book includes an inventory of some of the fragments of architectural ornament found in this palace during the excavations of Ernst Herzfeld.
This book offers a new interpretation of the palaces built by the Abbasid dynasty of Iraq at the apex of its political power from 750 to 900 A.D., focusing on the main palace of Samarra, the Dār al-Khilāfa, as a case study. Early Abbasid palaces are known for their massive footprints, elaborate floorplans, and extensive decoration on the one hand, and for their speedy construction, uneven quality, and brevity of courtly occupation on the other. This study argues that these palaces reveal a concept of monumentality endemic to their era that did not assume the long-term permanence of the building. Rather, such palaces, conceived by their patrons and architects as “impermanent monuments,” were designed to create legacies of imperial power through the performative act of construction itself, the presentation of the finished product to select audiences during spectacular events, and the slow decay of their extensive ruins over time. These structures utilized large expanses of empty space combined with the elaboration of ceremonial protocols and the impact of innovative but often repetitive and inexpensive ornament to make a powerful impression without investing heavily in configurations of space or details of décor that might not survive. It was the words of viewers about these structures, either in the form of anecdotes or poetry, that the Abbasids understood to be truly permanent, and some caliphs encouraged the creation of elaborate poems to extend the impact of these palaces far beyond their anticipated use as courtly residences.

Considering these palaces in light of coeval ideas about monumentality and memory, this study advances knowledge on an important period in the history of Islamic architecture that has been difficult to approach due to the complexity of the archaeological and literary evidence. To this end, the book includes an inventory of some of the architectural ornament found in the Dār al-Khilāfa of Samarra during the excavations of Ernst Herzfeld, offering a presentation of that material based on findspot. This study’s synthesis of archaeological evidence, primary sources, and secondary literature raises fresh questions regarding the temporality of palace architecture in the pre-Modern Islamic world—a phenomenon not limited to the Abbasid period—and offers a counterpoint to notions of the monument as a permanent, unchanging structure. It will be of interest to historians of pre-Modern architecture, as well as scholars of Arabic literature interested in the relationship between poetry and other art forms.
Matt Saba

M.A. University of Chicago, Department of Near Eastern Languages and Civilizations, 2008.

B.A., with honors. University of Chicago, Department of Near Eastern Languages and Civilizations, 2006.