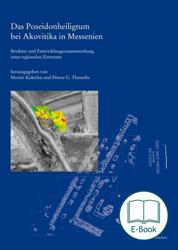 E-book 129.2 MB
Named after a suburb of the present city of Kalamata, the Poseidon sanctuary of Akovitika achieved considerable importance in the early Iron Age, even though it was surrounded by coastal swamps, which made staying there difficult. In light of this paradoxical finding, the interdisciplinary research campaign from 2005, which followed a rescue excavation of 1969, worked on the following questions: How can the development of the landscape and the geographical settlement context be reconstructed? What factors could have been decisive for the choice of the settlement location? Can the relevant parties that were active in the sanctuary, the catchment area, and the economic situation of the sanctuary be determined? What was the political function of the sanctuary before and after the laconic territorial state through to the current Messinia?