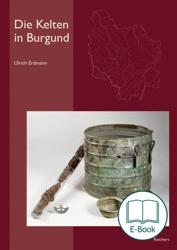 E-book 6.5 MB
For Burgundy the Celtic past can be presented much better than for other regions – for two reasons. The high level of documented research gives us a great amount of detail for two exemplary sample sites, for Mont Lassois (Vix) representing the Fürstensitz type of settlement, and for Bibracte (Mont Beuvray) representing the oppida system. And, secondly, it is a fortunate incident of surviving ancient literature that Gaius Iulius Cesar’s report on the Gallic war provides insight into the political structure and Iron Age society of East Central France in the first century BC, which we lack for other regions of Iron Age settlement.
Initially, precious and prestigious objects of Etruscan and Greek origins from tumuli, as well as weaponry – with similarities to south west Germany and Switzerland – show analogies to the life of Greek heroes. Photographies of samples from the regional museums of Burgundy and from the central national museum of archaeology in Saint-Germain-en-Laye near Paris are presented for illustration.
Not before the second half of the last millennium BC individual Celtic tribes become visible as migrants and warriors in Italy, Eastern Europe and Asia Minor, constantly involved in battle.
Crafts and commerce indicate a great variety of contacts with other regions, with their neighbours in Britain as well as with distant places like the Baltic and the Mediterranean. Burgundy is part of the La Tène style of decoration expanding all over Europe north of the Alps, and of the developments leading to the formation of the town-like oppida. For this period sufficient material is available to distinguish some features of political structures, society (leading elites, druids), and the private life, all of which were to change drastically during the transformation into a province of Rome; even the language was to fade away.
The great variety of Celtic life in Burgundy and its change over time is documented in a presentation of over twenty individual site locations and areas.