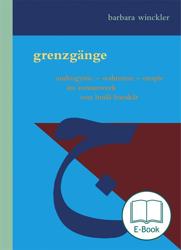 E-Book 2.4 MB
Hudā Barakāt’s novels are complex and densely woven texts that focus on the obsessions and inner conflicts of their protagonists. The first monograph dealing with the Lebanese author’s work, this book presents in-depth analyses of her first three novels, each of which addresses one key aspect: androgyny as metaphor, madness between lovesickness and mystical experience, and utopia or ‘real’ counter-worlds.
In the context of the ‘spatial turn’, the study analyzes these aspects as transgressions or borderline situations. It starts by developing a concept of ‘Grenzgänge’ (‘moving across/along borders’) that encompasses various physical as well as conceptual spaces, combining ideas from different disciplines: heterotopy, borderline and transgression, threshold and liminality as well as interspaces or ‘Third Spaces’ and ‘ZwischenWeltenSchreiben’ (‘writing-between-worlds’). The concept elaborated here offers an instrument for analyzing literary texts that opens up new perspectives and reveals analogies and differences between various borderline situations.

Modern Arabic literature is all too often seen one-dimensionally as a mirror of political and social conditions. Aspects like war, trauma, memory, and – in the case of women writers – female self-assertion thus appear to be the pressing issues when examining contemporary Lebanese literature.
The Lebanese author Hudā Barakāt (b. 1952), who has lived in Paris since 1989, is one of the most prominent figures in Arabic literature. Densely woven and complex, her novels address a wide range of aspects of human existence. With refined subtlety her literary writing is at once a reflection of and on both universal and specific Lebanese experiences. Although they are mainly set in the Lebanese Civil War (1975-1990), the war – one of many possible extreme experiences – functions like a kind of ‘blind spot’ which, although not the focus of attention, nevertheless determines events. The texts focus rather on the individual protagonists and their inner conflicts and obsessions – fragile characters who, each in their own way, live on the margins of society, transgress boundaries, cross borders, encounter limits, or move in borderline situations.
The first monograph devoted to her work, this volume analyses in detail the author’s first three novels, focusing on one key aspect in each: androgyny as metaphor in “Ḥajar al-ḍaḥik”, madness between lovesickness and mystical experience in “Ahl al-hawā”, and utopia or ‘real’ counter-worlds in “Ḥārith al-miyāh”.
In the context of the ‘spatial turn’, this study analyses these aspects as transgressions or borderline situations. For this purpose a chapter devoted to literary and cultural theory elaborates a corresponding concept of ‘Grenzgänge’ (‘moving across/along borders’) capable of comprehending the most diverse facets of both physical and conceptual spaces, drawing on and combining ideas from a variety of disciplines: heterotopy (Michel Foucault), borderline and transgression, threshold and liminality (Victor Turner), as well as interspaces or ‘Third Spaces’ (Homi K. Bhabha, Gloria Anzaldúa, Edward Soja) and ‘ZwischenWeltenSchreiben’ (‘writing-between-worlds’; Ottmar Ette).
By combining insights from cultural and literary theory with a close reading of the texts which traces and elaborates cultural-historical and intertextual references, the study establishes the concept of ‘Grenzgänge’ as a fruitful instrument of literature analysis that opens up new perspectives and reveals analogies and differences between various borderline situations.

Barbara Winckler is Junior Professor for Modern Arabic Literature und Culture at Münster University. She studied Islamic Studies, French Literature and Cultural Anthropology in Cologne, Aix-en-Provence, Damascus, and at the Freie Universität Berlin, where she received her PhD in Arabic Studies in 2009 and served as acting chair for Arabic Studies (2011-2013). In 2009/2010, she worked as a post-doctoral fellow at the Center for Literary and Cultural Studies Berlin (ZfL; project: “Topography of the Plural Cultures of Europe”). She was a member of the executive committee of the “European Association for Modern Arabic Literature” (EURAMAL; 2012-2014) and is currently a member of the advisory board of “Fikrun Wa Fann / Art & Thought”, a cultural magazine promoting dialogue with the Islamic world published by the Goethe Institute, as well as of the “Arab-German Young Academy” (AGYA).
Her research interests include modern Arabic literature, war and postwar discourses in Lebanon, cultural encounters between East and West since the early 19th century, the beginnings of the periodical press in the ‘long 19th century’, phenomena of borders and thresholds, literary theory and gender studies. In 2011, she received a 5 years research grant (Dilthey fellowship, VolkswagenFoundation) for a project on the newly emerging Arabic periodical press and its impact on the public sphere in the 19th century, concerned with identifying analogies with the beginnings of the periodical press in early modern Europe.
Apart from the present volume “Grenzgänge” (“Moving Across/Along Borders. Androgyny – Madness – Utopia in Hudā Barakāt’s Novelistic Œuvre”), her publications include a number of articles well as several co-edited volumes on different aspects of Arabic literature, such as “Arabesken / Arabesques” (2005), “Poetry’s Voice – Society’s Norms. Forms of Interaction between Middle Eastern Writers and their Societies” (2006), “Arabic Literature – Postmodern Perspectives” (2010), and “A Life in Praise of Words. Aḥmad Fāris al-Shidyāq and the Nineteenth Century” (forthcoming). In addition, she is member of the editorial board of the German “Kritisches Lexikon zur fremdsprachigen Gegenwartsliteratur” (a critical dictionary of contemporary authors of world literature) and of the book series “Literatures in Context. Arabic – Turkish – Persian”.