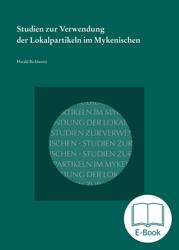 E-book 3.0 MB
The ‘Studies on the use of local particles in Mycenaean Greek’ close a gap in the analysis of the Mycenaean Greek language. The book offers the first comprehensive analysis of this special part of the lexicon in Mycenaean Greek. The so called local particles can surface as prepositions, preverbs or adverbs. In Mycenaean Greek the use of local particles as prepositions is the most frequent one. As adverbs and preverbs they appear much less often, which is due mainly to the character of the Mycenaean Linear B texts: They are predominantly of an economic character in the farther sense of the word and show an often monotone style making hardly anytime any use of verbal expressions. The necessity to use prepositions is further restricted by the fact that the functions of the cases locative, ablative, and instrumental inherited from Proto-Indo-European are still more or less intact and can thus still be used without the prepositions usual, often necessary or even indispensible in alphabetical Greek.
Thus the prepositions used as first members in compound nouns form the biggest part of the corpus of word-forms analysed in this study. Of these compounds the majority are personal names. This obviously shows a big difference between Mycenaean and alphabetical Greek as far as the distribution of the local particles on their different uses is concerned and as far as the relative quantity of eauch local particle is concerned. Some prepositions used throughout and frequently in alphabetical Greek do not show up (yet) in Mycenaean Greek. All in all some 170 (including writing variants vel sim. about 200) word-forms, which might contain a local particle judging from the way they are spelled, have been analysed in the present study. For most of them such an analysis has been put forward before. These former propositions have been checked thoroughly and where possible a final judgement was given. Until now the existence of 22 local particles has been discussed for Mycenaean Greek. For some of these presumably 22 local particles potentially to be found in Mycenaean word-forms no positive evidence could be put forward so far, most of them can be discerned quite clearly, however. More than half of the more than 170 examined word-forms contain one (exceptionally even two) of these 22 local particles for sure or at least probably.
In spite of the well-known restrictions always applying to studies of Mycenaean Greek texts because of the small size and the lopsidedness of the corpus, this study once more shows clearly the greater archaicity of Mycenaen compared to alphabetical Greek. It offers a new basis for comparative studies and studies in Greek language history by Indoeuropeanists, mycenologists and philologists of the Greek language.