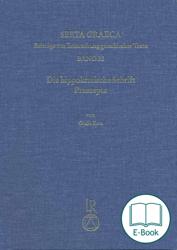 E-book 8.8 MB
The ancient medical text Praecepta, which contains deontological rules on the ideal behaviour of physicians towards patients and colleagues, is one of the most difficult work of the Corpus Hippocraticum. The author offers a new critical edition of the Greek text, established through an in-depth analysis of the manuscript tradition, and provides both a German and an Italian translation. A word-by-word commentary represents an invaluable support for a better understanding of the content. A final appendix offers a critical, annotated edition of a long scholion on the Praecepta.

This new edition of the Hippocratic work Praecepta represents an important contribution both for the history of ancient medicine and for classical studies: a comprehensive and in-depth analysis of all the aspects of this text is for the first time offered in this volume.
The Praecepta are one of the most recent, difficult and neglected texts of the Corpus Hippocraticum. They can be dated around the first century AD and contain deontological rules for students of medicine, i.e. rules on their ideal behaviour toward patients and colleagues.
This book is divided into four main sections: the first three sections (introduction, critical text with translation, commentary) regard the Praecepta, while the last one deals with a long scholion on the opening sentences of the Hippocratic text.
The first chapters of the introduction analyses the cultural and historical context of the work. In the following chapters, she offers a detailed analysis of the manuscripts that transmit the Praecepta, by exploring both the direct and the indirect tradition. She also devotes a particular attention to the previous editions of the work from the Renaissance onwards. In the last chapter of the introduction, the difficult language of the text is taken into account, along with its grammatical and dialectal characteristics.
The edition of the ancient Greek text contains both a critical apparatus and an apparatus of the loci similes. A German translation accompanies the Greek text, whereas the Italian translation follows the critical edition.
The longest part of the book devotes to a detailed word-by-word commentary of the Praecepta. This commentary represents an invaluable support for a better understanding of this difficult text. Each chapter of the commentary is opened by a paraphrase of the correspondent text, which aims at clarifying the original Greek expressions.
An appendix of about 50 pages is devoted to the edition and analysis of a long scholion transmitted in MS Vaticanus Urbinas graecus 68. This scholion was probably composed in Late Antiquity or in the Middle Byzantine period and represents a commentary on the first sentences of the Praecepta, which deal with the relationship between the practical and the theoretical parts of medicine.