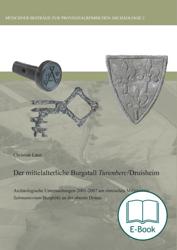 E-book 60.0 MB
The archaeological site of Burghöfe is known mainly for the Roman fort and not for its medieval castle. Excavations from 2001 to 2007 established a first picture of the medieval history of the site. By the 9th or 10th century a fortified manor house was built in the ruins of the late Roman fort, which was extended to a castle with a central keep in the 11th century. In the 12th century the castle named “Turenberc” was listed as a royal property. During the 13th and 14th century the dynasties of Pappenheim, Wittelsbach and Waler transformed the large fortification into a small but strongly fortified castle. The huge ditches and access yard are still preserved.
Although Bavaria has numerous castles, ruins and sites of former castles, few have been archaeologically investigated. The genesis of medieval aristocratic castles still poses a lot of questions, although during the last years archaeology has made major advances in answering them. Research focused mainly on castles owned by renowned dynasties; these, however, are not statistically representative of the majority of aristocratic castles which were mostly only of local importance.
The archaeological research on the late Roman fort of “Submuntorium”/Burghöfe near Mertingen provided the opportunity to explore the early stages of the development of a small medieval castle, which was only known by a few metal small finds of the 7th to 10th century.
The aim of this study is the publication of the archaeological features and finds and to link them with the historical background. Special attention is paid to the typochronological analysis of the vast number of finds, hereby establishing a basis for future research on settlements from northern Bayerisch-Schwaben dating from the 7th to 15th century.
Despite the small excavated area, both archaeological features and finds in combination with geophysical data, topographical observations and conclusions by analogy point to an initial phase as a fortified Carolingian-Ottonian mansion. The detailed comparison with castles and imperial palaces of the Early and High Middle Ages, mainly from Southern Germany, proves that the fortification of the 9th to 11th century had an economic rather than a military function. The settlement structure is rarely paralleled in contemporaneous castle architecture. This “curtis” measuring several hectares was transformed into a castle by the end of the 12th century. Considerations of various historical aspects allow an identification of this castle with a site named “Turenberc”, which was listed as part of royal property and can probably be interpreted as an access yard for the market and the royal castle in Donauwörth. It is not until the beginning of the 13th century, when the castle named “Turenberc” or Druisheim became the property of different dynasties, especially the Pappenheimer, Wittelsbacher and Waler, that the castle can be incorporated into regional architectural tendencies.
These unexpected results enrich the knowledge of castle architecture not only in the lower parts of the river Lech valley but also for the whole of Bavaria. A numismatic article by B. Päffgen about a Carolingian denar found in Burghöfe completes the present publication.

Christian Later studied Prehistory and Early Medieval Archaeology, Medieval History and Palaeoanatomy in Munich and Kiel and received his Masters degree from the University of Munich in 2004. Beginning as a student and continuing as a graduate he worked on several excavations and field projects, especially in Southern Germany. These include research on the late Roman military site of Burghöfe conducted by the Department of Archaeology of the Roman Provinces at the University of Munich. Currently he is writing his doctoral thesis on the Priory of Solnhofen in the river Altmühl valley. His research interests are comprised of medieval material culture from the 8th to 15th c. and early Christianity before 1000 AD in Southern Germany, as well as the archaeology of medieval castles, churches and monasteries.