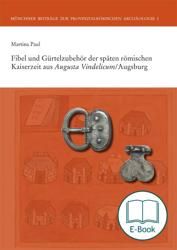 E-book 8.6 MB
For the first time ever is the large, manifold collection of late Roman brooches and belt fittings from the late third until the first half of the fifth century AD from the provincial capital Augusta Vindelicum/Augsburg documented and typologically analysed. The find contexts and the spatial distribution in the urban area was also assessed. The so called crossbow brooches and the different belt fittings were mainly used by civil servants and soldiers of the late Roman army. The finds are a significant reference group for the Roman Alpine and Danube provinces and prove the presence of Roman administration and military in Augsburg up to the second quarter or the mid fifth century AD.
Martina Paul studied from 2004 to 2010 Archaeology of the Roman Provinces, Prehistory and Ancient History in Munich and received her Masters degree from the University of Munich in summer semester 2010. She is currently writing her doctoral thesis on brooches from the early and mid Roman period from Augsburg and participates in the Doctoral Program Classical and Ancient Studies (PAW) which is involved in the Munich Center of Ancient Worlds (MZAW). Beside her research interests which comprise Roman dress accessories she takes part in field projects of the Archaeology of the Roman Provinces in Egypt and Libya.