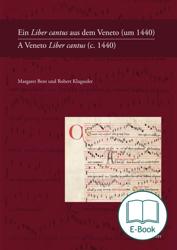 E-book 278.0 MB
This book results from Robert Klugseder’s discovery of new fragments in Vienna (Fragm. 661) and Margaret Bent’s recognition that they belonged to the same original manuscript as a set of fragments in Munich (Mus. Ms. 3224, already known). Together they make a torso of 12 leaves with 20 compositions, nearly half of which are unique, an important complement to the already-known Veneto manuscripts of international repertory of the first half of the 15th century. A high-quality colour facsimile of these leaves, together with associated fragmentary survivals, is preceded by an in-depth codicological and repertorial study in German and English.
This facsimile edition results from Robert Klugseder’s discovery of new fragments in the Vienna National Library (Fragm. 661) and Margaret Bent’s recognition that they belonged to the same original manuscript as an existing set of fragments in the Bavarian State Library, Munich (Mus. ms 3224), eight leaves from an Italian manuscript of the second quarter of the 15th century. Together they make a torso of 12 leaves, 24 pages, of a manuscript originally containing at least 107 folios, probably more.
Taken together, the leaves in Munich and Vienna are a significant addition to the three main Veneto sources of the first half of the century: the extensive manuscripts Bologna Q15 and Oxford Canon. misc. 213, and the somewhat smaller manuscript Bologna, University Library 2216.
Despite the use of expensive parchment, the manuscript does not seem to have been systematically planned. It may be that pieces were added as they became available. The few original folio numbers do not permit firm conclusions, but it may have started with a section of Gloria settings, followed by Credos, with a section mainly devoted to motets and shorter pieces around folio 100, and a group of Magnificats at some unknown position before or after that.
Although the Munich and Vienna fragments are no longer bound into their host volumes, it nevertheless proved possible to identify all those volumes. This search for host volumes among the Bavarian State Library’s holdings of Weihenstephan incunables brought to light traces of further leaves from the same manuscript, which had left fragmentary offsets on the wooden boards of the bindings. Two of these fragmentary remains were identified with works known from other manuscripts, thus extending the list of compositions to 22, of which nine, nearly half, are unique.
Composers are known for all but five of the compositions. Most are local to the Veneto, or, like the northerners Arnold de Lantins and Du Fay, are known to have spent part of their careers in north-east Italy, like many young musicians from cities such as Liège and Cambrai. The Italian composers in the Veneto are Cristoforus de Feltro, Antonius de Civitate, Bartolomeo Bruollo, Johannes de Quadris; transalpine composers with Italian careers or associations are Arnold de Lantins, Beltrame Feragut and above all Guillaume Du Fay; in addition, the music of the northerner Johannes de Sarto and the Englishman John Dunstaple already circulated in the Veneto.
Margaret Bent and Robert Klugseder have explored all reasonable possibilities in search of further leaves of this important source. There is good reason to think that it was already dismantled around 1500, and some of it used in Venice for scrap parchment; and that only part of the manuscript found its way to the Bavarian monastery of Weihenstephan (perhaps as packing material for unbound printed books) where it was used in book bindings. Further discoveries in other libraries cannot be ruled out.