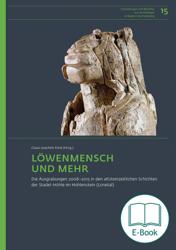 E-book 60.3 MB
The Hohlenstein in the Lonetal (Lone valley) is part of a group of caves in the Swabian Alb, in which the oldest known evidence of figurative art in the history of man have been found and which have been UNESCO World Heritage Sites since 2017. It gained special attention for the so-called ‘Lion Man’, a unique representation of a mixed being carved from mammoth ivory and dating from around 35,000 to 40,000 years ago. Excavations on the Hohlenstein that have been carried out between 2008 and 2013 have unexpectedly revealed more fragments of the figure of the ‘Lion Man’.