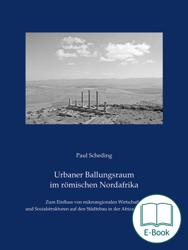 E-book 59.0 MB
North Africa is one of the most populated Regions in the Roman Empire. At the beginning of the 3. Cent. A.D. a tremendous agglomeration of cities was located in Africa proconsularis which had a very individual urban culture. This book deals with the question: how the economy and the cultural identity of a micro-region shaped their cityscapes? Thanks to an interconnected analysis of architecture, rural hinterland and their inhabitants the author shows how a regional understanding of the city altered the urban landscape.
‘’This richly illustrated volume derives from Scheding’s PhD dissertation (University of Köln, 2013/2014). It examines the urban topographies of five communities in Roman North Africa (Thugga, Musti, Thignica, Uchi Maius, and Thuburbo Maius) located in the hinterland of Carthage and politically dependent on that city. Scheding establishes differences in how their urban areas were articulated, in comparison with otherwise comparable independent towns. He discusses these differences with a view to socio-political factors, notably how subordination affected elite ambitions, and the related question of the towns’ roles within the microregion. The book consists of four parts; (I) provides background on the topography, economy, and power dynamics of the microregion as well as a discussion on method; (II) is the actual examination; (III) discusses comparanda; while (IV) extracts points from earlier chapters and adds a discussion on elite agency. This is followed by summaries in German, French, English, and Italian, a catalogue of locations mentioned, bibliography, indices, and a generous collection of maps. The standard of production is commendably high, including proofreading and translations.

Scheding’s book is a welcome contribution to the larger discourses on townhood and provincial elites, as well as North African studies. It reinforces the value of regional studies, forming a complement to larger overviews (most recently by Andrew Wilson)[1] as well as single-town studies. He knows his material well, having participated in multiple campaigns in the area (detailed on p. 11). Analysing the cityscapes in ways reminiscent of Alan Kaiser[2], he identifies patterns that challenge established ideas on what processes shaped Roman provincial towns. Importantly, he reformulates the link between elite ambition and urban monumentality, underscoring regional elite competition and mutual emulation rather than local pride or imitation of Rome. He also questions the notion that these towns were ends in themselves: the individuals and families that affected their physical aspect the most had their ambitions set on Carthage, which is also where many of them resided.
(...) That Scheding privileges archaeology over epigraphy is refreshing, and his arguments are both interesting and convincing.
(...) I would recommend the book to anyone interested in African urbanism, and more generally in the relation of provincial elites to their towns.‘’