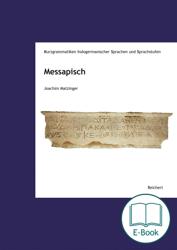 The extreme southeast of Italy, Puglia and especially the Salento, is the territory where the ancient Indo-European Messapic language is attested in about 600 inscriptions from the 6th to the 2nd century BC. Despite the numerous epigraphic documents, Messapic is a fragmentarily attested language, since short tomb inscriptions prevail which only mention the name of the buried person. By contrast, the few longer inscriptions are very difficult to understand. However, it is evident that Messapic is not an Italian language. It is assumed that the Messapic language has been brought from the Balkans to Italy, which is also supported by the linguistic characteristics of Messapic. The inscriptions known until 2002 have been published in the Monumenta Linguae Messapicae edited by Carlo de Simone and Simona Marchesini (Reichert Verlag). Meanwhile, new important epigraphic material has been excavated in Castro (southern Salento). Based on the epigraphic material, a concise presentation of the phonology, morphology and syntax of Messapic is given for the first time. The presentation is primarily synchronic, but in some instances questions of linguistic history are also dealt with.
In literature, Messapic has been treated mostly in a very short form, often based on outdated studies. This presentation is the first comprehensive description of Messapic on the basis of the entire epigraphic material. The presentation is not limited to the phonology and the morphology of Messapic, but also attempts, as far as possible, to gain insight into the syntax of Messapic. The 18 inscriptions analyzed in this presentation are intended to show the characteristics of the epigraphic material and what peculiarities arise in their interpretation. This presentation is therefore not only of particular interest for historical linguistics, but also for ancient history and archeology, especially of ancient Italy.

In these concise grammars, the material is presented in a convenient way, mostly in tabular form, and can be used by teachers as a basis for advanced lessons. They each provide an overview of the documentation, writing system, and the elements of phonology, morphology, and, where appropriate, syntax of the respective language or stage of a language, taking into account a selection of recent literature. For this purpose, the focus is on a synchronic presentation; diachronic facts are explained insofar as they are didactically helpful for beginners. All languages are presented in transliteration in order to allow for an easier start for new learners.